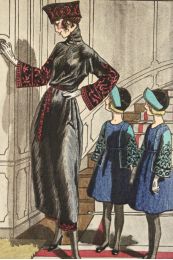 The story began in 1912, when Lucien Vogel, a man of the world involved in fashion (he had already been part of the fashion magazine Femina) decided, with his wife Cosette de Brunhoff – the sister of Jean, creator of Babar – to set up the Gazette du bon ton, subtitled at the time: “Art, fashion, frivolities.” Georges Charensol noted the reasoning of the editor-in-chief: “'In 1910,' he observed, ‘there was no really artistic fashion magazine, nothing representative of the spirit of the time. My dream was therefore to make a luxury magazine with truly modern artists…I was assured of success, because when it comes to fashion, no country on earth can compete with France.'” (“Un grand éditeur d'art. Lucien Vogel” in Les Nouvelles littéraires, no. 133, May 1925). The magazine was immediately successful, not only in France but also in the United States and Latin America.