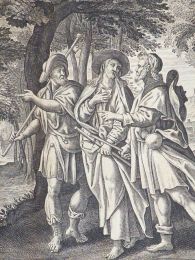 
Original content untrimmed, chisel made by Claes Jansz Visscher from a painting of the sixteenth century by Maarten de Vos (or Martin) .Epreuve on watermarked laid paper, working from the early seventeenth siècle.Il is a illustration of a passage of the Gospel according to Luke 24.13-16: "And here, the same day two of them were going to a village called Emmaus, which was from Jerusalem about threescore furlongs, and they talked of all that had past. While they were talking and discussing, Jesus himself came near and went with them. But their eyes were kept from recognizing him. " (Episode pilgrims to Emmaus after the resurrection of Jesus) .Légende in Latin in the lower part of the gravure.Signature artists from the numbered "2" planche.Mention in the lower right corner in the engraving. handwritten mention "130" in the upper right margin of the planche.Une old handwritten annotation in Greek characters under the right angle visible cuvetteFiligrane by transparence.Légères foxing mainly small and marginal spots angle, a small hole in the engraving another in the margin, otherwise nice condition for this extremely rare engraving and large fraîcheur.Maarten de Vos (or Martin), Antwerp from 1532 to 1603, is a Flemish painter. He was a pupil of Frans Floris, and then completed his training with Tintoretto. He was responsible for historical paintings in the Mannerist style, including a Holy Paul bitten by a snake on the island of Malta '(1568) which is in the Louvre in Paris. --- Please note that the translation in english is done automatically, we apologize if the formulas are inaccurate. Contact us for any information!