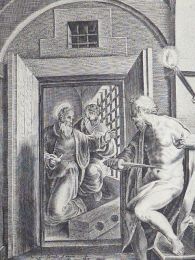 
Original etching done with chisels by Claes Jansz Visscher says Piscator after a painting of the sixteenth century Johannes Stradanus.Epreuve on watermarked laid paper, working from the early seventeenth siècle.Il is an illustration of a passage from the Acts of the Apostles 16.25-28: "By the middle of the night, Paul and Silas were praying and singing hymns to God, and the prisoners heard Suddenly there was a great earthquake, so that. the foundations of the prison were shaken. at the same time, all the doors were opened, and every one's bands were loosed The jailer woke up, and seeing the gates of the prison open, he drew his sword and was about to kill himself, supposing that the prisoners had fled But Paul cried with a loud voice., Do thyself no harm, for we are all here "Legend in Latin in the lower part of the gravure.Signatures.. artists from the numbered "28" in the lower right corner in the handwritten gravure.Mention "161" in the upper right margin of the planche.Une old handwritten annotation in Greek characters in the bowl angle planche.Mention. a visible watermark crown by transparence.Infimes foxing and small marginal stains without damage to etching, a skillful restoration using a small strip of transparent Filmoplast back, otherwise very nice condition for this extremely burning rare and of great fraîcheur.Johannes Stradanus says Giovanni Stradano or Jan van der Straet is a Flemish painter and engraver, born in Bruges in 1523 and died in Florence on February 11 1605 After I started to learn painting from his father, following the death of the latter, he studied in the studio of Frank Maximiliaan (from 1535-1537) and then in that of Pieter Aertsen in Antwerp (from 1537 to 1540). In 1545, it is a free master in the Antwerp painters' guild. He begins a journey across Europe: in France, then in Italy, where he lived first in Venice, before settling in Florence. He worked for Cosimo I de 'Medici and working with Giorgio Vasari for the decoration of the Studiolo of Francesco I de' Medici, and the hall of Clement VII of the Palazzo Vecchio. In 1565, he was part of teams of painters and sculptors responsible, under the direction of Giorgio Vasari, to realize the gigantic stage for the entry in Florence Joan of Austria [1], on the occasion of her marriage François I de 'Medici. Greatly influenced by the mannerist, including Michelangelo, Johannes Stradanus contributes to the development of the great history painting to the Italian. He painted several altarpieces for Florentine churches. He also traveled to Rome from 1550 to 1553 and in Naples 1576.Après stay in Antwerp in 1578, he devoted much of his time to engraving. --- Please note that the translation in english is done automatically, we apologize if the formulas are inaccurate. Contact us for any information!