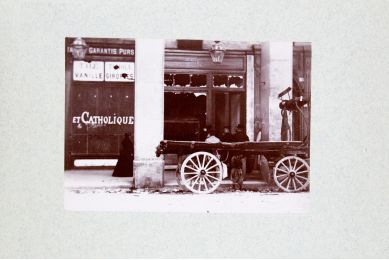 Unique album containing 47 original photographs printed at the time on albumen paper, in various sizes (15 x 11 cm, 15.5 x 11 cm, 11 x 7.5 cm). The majority of the photographs have the information “Phot. Leroux Alger” on the plate. Each shot, with the exception of the last thirteen, is captioned in French in pencil on the lower right corner of the album. These captions, very precise since they are dated and even show the time of each event, make us think that it could be the photographer's personal copy.
Contemporary binding in half burgundy shagreen, spine evenly sunned except a small area, double gilt fillets on the old pink boards lightly discoloured and foxed, gilt title and date on the first board, marbled endpapers. Some rubbing on the corners and grooves.
Rare photographic report showing the anti-Semitic riots that took place in Algiers between 20 and 25 January 1898, following the Dreyfus Affair, the appointment of the former Prefect Lépine as Governor and the Crémieux Decree.
“From 20 to 25 January, the mob rules the city's streets, roads and squares. The momentum of the police allows the Anti-Semites, sometimes helped by the Muslims, to undertake a war on the Jewish (the “youpinades”), plundering shops, vandalising homes, lighting fires and caning or stoning any passer-by thought to be Jewish. While the tension is at its height, there are many confrontations between the Jewish and anti-Jewish, resulting in injuries and one death, a Spaniard, Félix Cayrol who was stabbed by a Jew.” (Catherine Bruant, La Valise en carton ou Les Deux Exils du père, 2016) The album that we have to offer shows precisely the plundering of the Jewish business, Cayrol's funeral procession and the military control of the demonstrations (cavalry, infantrymen, etc.).
Several photographs in this album were used to illustrate the article dedicated to the riots published in Le Monde illustré n°2132 on 5 February 1898. The photographer, Alexandre Leroux, sent them to the newspaper who had them reproduced by the artist Louis Tinayre. It is a completely surprising album, Leroux mostly being known for his panoramas and portraits of natives; from here on he becomes a real journalist-reporter, using his photographic skills as part of his journalism.
We have only found one other copy of this type of album in the Museum of the Art and History of Judaism (ahJ, Paris) which contains slightly different photographs.