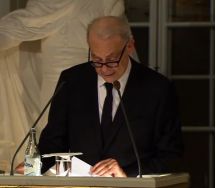 Modiano and the Nobel Prize
When an author shy and modest as Patrick Modiano suddenly highlighted by a prestigious Academy as the Nobel Prize, the acceptance speech he utters is like him: humble. But ideas are also asserted that speech is hesitant, including the defense of Literature with a big L.

One can indeed perceive in the authors cited by Modiano how it was marked in his readings and influenced his writing by the great writers: Shakespeare, Tolstoy, Poe, Melville and Stendhal, Flaubert, Proust, Baudelaire, Dickens, Mallarme, Yeats, Racine, Homer ...

Conviction emerges, which states that the conservation and transmission of the great literary works, and with them, the ideas and the history of humanity, is a necessity for the future: "This is probably the vocation of novelist, before this great writer's forgetfulness, to reappear a few words erased half, as these lost icebergs that drift on the surface of the ocean. "

Nobel Prize of the academicians have understood that highlighted in Modiano "the art of memory with which are mentioned the most elusive human destiny."

See here for the video of the speech
Leave a comment