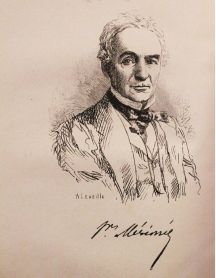 In 1825, The Theatre of Clara Gazul, marked by hispanophilie in the zeitgeist, illustrates brilliant literary debut. Accustomed salons of the Restoration, Merimee leads a mundane life which gradually approach the power. Through relationships of his father Leonora Mérimée (1757-1836) Permanent Secretary of the School of Fine Arts, it accesses in 1831 as chief of the office of the General Secretariat of the Navy, then in the direction of the office of Count 'Argout, Minister of Commerce. Once a Knight of the Legion of Honour, the same year the amenities of official recognition will facilitate the publication of his works for the rest of his career. On May 27, 1834, Adolphe Thiers, Interior Minister, appoints the Inspector General of Historic Monuments after Ludovic Vitet. The July Monarchy to be Merimee consecration period, which will be born the most famous stories: The Venus d'Ille (1837), Colomba (1840) and Carmen (1845) Elected to the Academy of Inscriptions and Belles. Letters in 1843 and then to the French Academy in 1844, he published at the same time the history of Arsène Guillot whose plot mixes love, deceit and unworthy religious sentiment many of his colleagues.

Longtime friend of Eugénie de Montijo and close to Napoleon III during the Second Empire, Merimee agrees to enter the Senate under the encouragement of the Empress. The decades of the reign of Louis-Napoleon Bonaparte erected in Mérimée influential politician. therefore more focused on historical research that literary invention, those glorious years will be marked by the publication of various studies slavophiles: Episode of the history of Russia. The False Demetrius (1853), The Cossacks of old (1865), History of the reign of Peter the Great (1864, 1867-1868).

Tired by illness and a life of deeper commitments, Merimee goes out on the French Riviera September 23, 1870, where he was accustomed to retire every winter since 1856.
This bibliography is intended as a verified and updated synthesis of various bibliographic reference collections of first editions of the author:
We have enriched a proposal of digital resources, dedicated websites, articles and scientific journals, various sources ... inviting to pursue the study of the work and editions of Prosper Mérimée.
Theatre Clara Gazul, Spanish actress.

A. Sautet & Co., booksellers, Place de la Bourse, near the Feydau street (printing H. Fournier), Paris 1825; 8vo. Printed covers. -IX Pp. pp-337 .- (1) (2f half-title and title with an epigraph borrowed from Miguel de Cervantes.) - (1f.).
Contains: The Spanish Denmark - A woman is a devil or the Temptation of Saint Anthony - The African Love - Ines Mendo, where the defeated prejudice. - Ines Mendo, or the Triumph of prejudice - Heaven and Hell.
Very few copies have frontispiece portrait of the woman dressed as Mérimée (there are false). Also there is a cache, placed on the portrait, restores the hair and real costume Mérimée (any scarcity). Copies of the original edition have the half-title Theater of Clara Gazul. Relisted with relay title in 1826. Wanted.
Second edition original part: Fournier, 1830; 8vo. (2f.) - 449 pp .- (2f.). Contains more opportunity and the carriage of the Blessed Sacrament. Also sought that the first edition.
First edition in-12: Charpentier, 1842. With La Jacquerie.

The Guzla or Illyricum choice of poems, collected in Dalmatia, Bosnia, Croatia, and Herzégowine.

The Jacquerie feudal stage, followed by the Family of Carvajal, drama. By the author of the Théâtre de Clara Gazul.

Printed by Balzac. Relisted with new titles in 1829 and 1833.
First edition in-12: Charpentier, 1842 following the Théâtre de Clara Gazul.

1572 Chronicle of the reign of Charles IX, the author of the Théâtre de Clara Gazul.

Mosaic, the author of the Théâtre de Clara Gazul.

Contains: Mateo Falcone - Vision of Charles XI - The removal of the redoubt - Tamago - The Enchanted Gun - Federigo - Ballads - The game of backgammon - The Etruscan Vase - the malcontents - Letters on Spain: First: The Fighting bulls. Second: A runtime. Third: The thieves.
Very few strong vellum. The cover door Mosaic, a collection of tales and short stories by Prosper Mérimée, author of Clara Theatre Gazul and chronic of the reign of Charles IX.
First edition in-12: Charpentier, 1842. Following Colomba.

The Double Misunderstanding, by the author of Clara Gazul Theatre.

Notes from a trip in the south of France, by Prosper Mérimée, general inspector of historic monuments in France.

Notes from a trip west of France, by Prosper Mérimée, general inspector of historic monuments in France. From a report addressed to the Minister of the Interior.

Notes from a trip to Auvergne. By Prosper Mérimée, Inspector General of Historic Monuments. From a report addressed to the Minister of Interior.

Notes from a trip to Corsica, Mr. Prosper Mérimée, inspector of historic monuments in France.

The Souls of Purgatory.

Essay on the religious architecture of the Middle Ages, particularly in France, Mr. Prosper Mérimée. (Extract from the Yearbook of the Society of the History of France, 2nd year).

This volume contains, in addition to Colomba, The Venus of Ille and Souls in Purgatory, Highly sought. Three Belgian counterfeits had appeared previously at Hauman, Meline and Jamar, 1840; in-16. They are fairly traded.
First edition in-12: Charpentier, 1842.

Drawn with 150 copies. The warning reads: "This book, printed in a small number of copies, is not intended for the public. Busy for some time of a historical work on the last years of the Roman Republic, I wanted, before turning the day, test my strength. I chose for this test the time of the social war, first because it seemed to me that she was perhaps too much neglected so far, and further, because the narrative of events which Italy was then the theater forms a necessary introduction to the vast subject that I propose to deal with. "
In the Letters to an unknown, Volume I p.49, Merimee provides guidance on the draw of this book: "On my return to Paris, he wrote in March 1842, I gave myself the innocent pleasure of a print Book without publishing. One drew a hundred and fifty copies: beautiful paper, images, etc ..., and I've given people that I liked .... ".
Original Edition in large part, entitled: Studies on the History of Rome. Magen, 1844 2 in-8. Volume II is entirely new. Quite rare.
First edition in-12: M. Lévy, 1853. A very few strong vellum.
Arsene Guillot.

Royal Institute of France - Speeches in the public session held by the French Academy for the reception of M. Merimee, February 6, 1845.
Firmin Didot brothers typography, printers Institute, rue Jacob, 56, Paris, 1845: in-4. (1f title.) - 37 pp. and 5 p. white.
Mérimée's speech occupies pp.1 to 25; M. Etienne response, pp. 27 to 37. First Edition not put on the market. The speech was published only Mérimée.

Instructions on the paintings of the Church of Saint-Savin. By P. Merimee.
Royal Printing Office, 1845-1846; folio. (1f half-title bearing:. Collection of unpublished documents on the history of France, published by order of the king and the care of the Minister of Education Third series, archeology..).
Frontispiece designed by E. Viollet-le-Duc, and 42 boards designed by Gerard Seguin, lithographed by H. Roux elder, color (chromolithographed by Engelmann and Graf). The work appeared in four deliveries.

Inauguration of the statue of Froissart in Valenciennes, September 21, 1856.
Typography Firmin-Didot brothers, son and Co., printers of the Imperial Institute, rue Jacob, 56, Paris sd (1856); 4to 14 pp.
Mérimée's speech occupies pages 1 to 4. Edition. Not put on the market.

Of the utmost rarity, fired 3 copies.
Second Edition: Brussels, 1872. 8vo. (2f.) - VII-59 pp. Rare, reprinted 129 copies, 20 Holland and China 9. Wanted given the near impossibility of obtaining the first edition.
Other edition in Belgium, same date. Some laid and some china. Uncommon. Text reprinted in the News.

In large part original. There, the head of the Blue Room, a sticker on timber (p.184) that is not in all copies. Fairly common. 10 Holland, eagerly sought.

Portraits of Mérimée and Panizzi engraved on wood by A. Leveille. Fairly common and few sought on plain paper. 30 Holland. Very few copies of tests, cupboards (4?), Give only the full text.

Seven letters to Stendhal.
Rotterdam, at the expense of the Company in 1898; Small 8vo. Printed covers. 55 pp.
Posted by MC Striyenski. Original edition. Shot 25 copies, not put on the market.

Letters to the Duchess of Castiglione-Colonna.
Boivin, Paris 1938; 8vo. Portrait.

All the first editions and books incribed by Mérimée on Edition-originale.com :

Encyclopedia of the Agora: http://agora.qc.ca/Dossiers/Prosper_Merimee