Focus on the first edition of The Human Species. 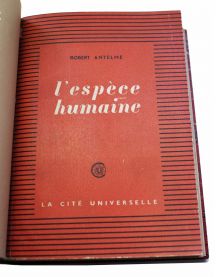 Robert Antelme - L'Espèce humaine
"The variety of relationships between people, their color, their customs, training classes conceal a truth that here appears bright on the edge of nature, with the approach of our limitations: There is no human species , there is a human race. This is because we are men like them that the SS will ultimately powerless before us. "

This testimony of Robert Antelme, Deported Resistance to Buchenwald to Dachau and then released thanks to the intervention of François Mitterrand, had not immediately impact it has today.

This fundamental work on Camps experience was not in fact discovered in 1957 at its reissue by Gallimard. He then had a more significant impact especially exerted considerable influence on the thinking man following the camps. So for Maurice Blanchot who wrote an article in the New French Review, entitled "indestructible" (reprinted in infinite maintenance), the work of Antelme more than a testimony shows us humanity reduced to irreducible "In misfortune, we approach this limit, where, deprived of the power to say" I ", also deprived of the world, we would not be this other that we are not. ". It highlights "selfishness without ego" of "these men desperate to survive, attached to life but as impersonally, finding refuge in the sense of belonging to the species, a feeling that nothing can Cancel ".

Written shortly after the release of Robert Antelme, The human species experienced a first discrete edition in 1947.
Indeed, it is the third and final publication of the ephemeral publishing house, the Human City, founded in 1946 by Antelme and his wife Marguerite Donnadieu-Antelme, future Marguerite Duras.

After this confidential publication, the publisher went bankrupt and Robert Marin recovered the unsold stock to relist in new covers. The human species then became the first title of the collection Universal City Robert Marin.
However this second issue was no more echo than the first because in 1947 the work of Antelme suffers from competition from many writings on the subject published immediately after the war. However, as related by F. Lebelley "at a time when the stories abound, the special power of that book, a first sobriety upsets as a founding text book writer who also took recognizes Duras. "the broad literature." Robert Antelme never write else. Despite the accolades and honors, The human species will remain the work of a single life. " (In Duras, or the weight of a feather.)

Thanks to the intervention of Albert Camus, the book reappears ten years later in 1957 by Gallimard and then experiencing wider dissemination.

Therefore, this book is part of literary history as one of the most important writings confronting the painful but necessary reflection on the concentration camps and the human condition. It is after him that writers such as his friend Jorge Semprun can begin a new approach to the impossible writing camps.

In his foreword, Antelme already announced in 1947, what would become a major issue in this literature:
"We just came back, we reduced our memories with us our entire life experience and we felt a frantic desire to tell it as it is. And from the first days, however, it seemed impossible to bridge the distance we discovered between the language we had and this experience [...] How resign ourselves to not attempt to explain how we had come there? Yet we were there. And yet it was impossible. Just started to tell us that we were suffocating. To us, what we had to say when we began to seem unimaginable. »