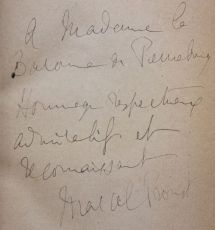 But Daisy Pierrebourg Claude Ferval his pen name, was mainly an admired novelist Proust when he confided to each new novel she published her admiration and her own desire to write. Thus in a letter from 1903, this poignant commentary on a passage Louder seems he announced, 10 years before the search, the future sacrifice of Proust writing and, in the novel, the failure of Swann to achieve this through:
"In all this a philosophy that we would come back and ask you for example if it's true that life gives us the grace we wish him provided we sacrifice the rest. If we thought it may be of some to sacrifice something else, it would be quick. stupefied But the rest, from seeing his face in pain. Finally it's hard to say. But you're right. "
This feeling that he is still so "hard to say" this is precisely the same subject Research. And the success, the reconquest of this life by the novels, it will make easier the urgent need in 1908: "You're a novelist, you! !. If I could create beings like you and situations, I'd be happy "Assertion that echoes the question of Proust:" Am I a novelist? "At the beginning of his first book.
Because this year is also the beginning of the writing of research which we find in Genesis the famous "Book of 1908."
From that date, the letters to Madame de Pierrebourg reflect the shed from a Proust-player to a Proust-author. Exhuming her former romantic attempts, compared to the work of his friend: "That feeling [of filial], pages already a bit older that I wrote [...] can show you, if I publish one day, I'm not absolutely unworthy to understand. [...] This scene of "good evening" near the bed, you would see, and how much less any other.. "This passage from John Santeuils it refers will, rewritten, one of the first and most famous scenes From Swann.
His finished work, it's even in the light of that of Ferval that the judge:
"In correcting the proofs [...] pages on jealousy, all the time the sentence where you show that the forced Montespan Mademoiselle de la Valliere fear, returned to me and I thought," If Madame Pierrebourg of bed until then, she will recognize that I have spoken the truth. "
These are also the tips in this admired writer he seeks on the eve of publication, as he had already done for Pastiches: "For the book I finish I would like to have your advice"; "If what I really think you care a little [...] nothing is more reciprocal. Savvy Do you not, I believe, the only person I once asked for a review of my edition pastiches."

With the publication of Swann, Proust therefore dedication to Mrs. Pierrebourg this copy and hearing his enthusiasm, requires his assistance in obtaining a literary prize. The price of the Happy Life which she was a member and former president was already awarded the Goncourt but left to conquer. Pressed by Grasset, Proust attempt with her one of the only - and fruitless - steps in this direction, "Since you like my book, I think I'm not too intrusive by asking you to help me to read it" ;
"My editor [me] will send my book (...) the Goncourt jury. Not officially too late, it still gets the books, but I think the price is pretty much given. Remains, however, that if, without having it, I could get someone became its lawyer, that the discussion, it would make my book in front of some light and we would read it, that's all I can desired. (...) I am very concerned that no one read me because it's so long, compact. Or maybe (...) you have friends in the Académie Goncourt. There are two to that it would be useless. elder Rosny, because Madame Tinayre I do not know, but it seems that has a predilection for what I write, recommended the book (without reading the rest at Rosny elder). Leon Daudet who will probably not for me, but with which I am bound too ridiculous to be able to recommend me without him. Finally Louis Robert (all spontaneously because the letter I am writing is my first step) was writes Paul Margueritte. But I think it will not much of anything. Perhaps you know the rest. There are, I believe, Geffroy, Rosny young Elemír Bourges, Descaves (but maybe not for this cost) Mirbeau (...). Besides all this may be in vain. I tell you, just in case "(Letter of November 8 - the date of the colophon - Madame de Pierrebourg, XII, 140)..
Although it states: "the letter I am writing is my first step," we know that he still sent a copy service press Lucien Descaves, member of the Académie Goncourt (see our catalog "Living with Proust" November 2013).

Lucien Descaves is hostile to Proust (and will remain so in 1919) and Madame de Pierrebourg unknown members. However, she offered him to intercede for the price of the French Academy but refuses Proust: "its small price does not highlight a writer, do not flatter the ego and I do not have one. "
Because the only constant worry and Proust, it is to be read and it's really the look and the judgment of the respected he is looking forward while addressing the book to Mrs. Pierrebourg writer: "I confess Just as it is only in the eyes of Claude Ferval I dare put [some pages so shocking] and pray Lady Pierrebourg to jump. "

Yet if this is the woman to letter and spirit "and more" Proust address his "respectful homage and admiration," "recognition" testified in this dedication is perhaps less directed to the artist that model was that of Mrs. Pierrebourg for one of the central characters in this first volume: Odette de Crecy.
As noted by George D. Painter: Paul Hervieu and his mistress are a source of inspiration couple Charles Swann and Odette de Crecy, whose relationship is a big part of this first volume of Research.
"It is Mme Aubernon [model Verdurin] qu'Hervieu had met the beautiful and talented Daisy Pierrebourg [...] and that he was in love with her. She was then 35 years old and lived apart from her husband Aimery de Pierrebourg: Odette, it will be remembered, was itself the separated wife of Pierre de Verjus, Comte de Crécy [...] Baroness deserted Mrs. Aubernon, taking Hervieu, and soon herself. . as Odette, a brilliant Fair Proust later attended They never married, never lived together, but their love lasted all their lives, but in other respects, their story has more than one analogy with that of Swann and Odette. Madeleine, the daughter she had had of Baron Pierrebourg, married in 1910 Count Georges de Lauris, one of the young nobles who served as models for the character of Saint-Loup, and Proust known at the beginning of the century. Perhaps this marriage he suggested to the union of Proust's daughter Odette and Saint-Loup. " (Marcel Proust In the early years, Mercure de France 1966) If we add to this that the Salon of Madame de Pierrebourg was located at 1 Avenue du Bois de Boulogne, correspondence with the characters - including the ritual walks Bois de Boulogne - is all the more striking.
Even more troubling, that Painter does not fall: it was in 1908, considering that Proust called "Odette" mistress Swann (named in previous versions Sonia and Anna and Carmen). But Odette is the name of a character in the novel Red Sky Ferval-Pierrebourg about which Proust wrote to him that year:
"But above all where you live, where you shout whole is in love for Odette." Autobiographical allusion to the side, "subjective" writes Proust's novel, Laurence affection for Odette and Odette Laurence is a reflection of the Baroness for her daughter Madeleine (see Note 8 Philip Kolb Tome Correspondence VIII, letter 135).
Proust defended himself against any autobiographical analysis of his work as he wrote to Jacques Lacretelle in 1918: "There are no keys to the characters in this book; or there are eight or ten for one. "But it is the long years spent in the rooms such as that of Mrs. Pierrebourg which were the main source of five hundred characters of Research, and among the several models held rigor Proust after reading his novel.
Baroness Pierrebourg she has also seen between the romantic lines of this first volume present in the character of Odette and Swann, his relationship with Paul Hervieu? The letters she wrote to Proust are unfortunately lost, but a response from Proust late November to allow some conjectures. Why does he thanks for appreciating "the beginning of [his] book" (ie the part before a love of Swann) when a letter of November 8, tells us that she has read the entire book ("since you like my book"). Strange also, the justification for Proust about Swann's jealousy towards Odette: "I have often thought towards the end of the second part if you read me, you would approve me. ". But that leaves no question to us is the enigmatic postscript of that letter:
"There is little time yet you wrote to me:" Dear Friend. " I hope the "Sir" reappeared shows no cooling would give me great pain. "
No doubt Lady Pierrebourg has she able to perceive only the noblest traits of Odette could be inspired by the person and, despite fears of Proust, their friendship remained intact throughout their lives.
He was also quickly convinced, as evidenced by this letter in part unpublished: "I know the infinite value of the things you say and I have never felt such a sense of gratitude Do not regret not knowing. Member of the Académie Goncourt. Perhaps if you could recommend me to them, not me would you not also written extensively today and what you would have told them would have made me less pleasure than you tell me. value of the Goncourt prize for me was to make me read a few minds that maybe he would have reported. Yet it is not that the friendship is as precious as that you have the kindness to tell you for me. "

Correspondence of Marcel Proust constructed by P. Kolb mentions a copy of the first edition of Research with handwritten dedication Proust addressed to Madame de Pierrebourg : in "respectful tribute, admiring and grateful." The baroness was to Proust both a close friend, a writer admired, and the model of one of the main characters From Swann. This precious dedication carries the richness and complexity of the greatest French writer of the twentieth century.