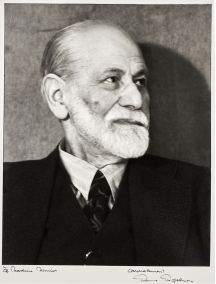 Freud sans complexe
Taken in May 1938, this unpublished portrait has been printed only after WWII when the negatives of this amazing and latest photo shoot – organized despite the constant surveillance of the Gestapo – were recovered thanks to Anna Freud.

This very rare photographic portrait of the psychoanalysis founder, however it was taken few days before his escape to London and revealing the stigmata of a cancer that will be fatal to him, is the unique smiling image of him.


One hundred and six photographs were taken during Engelman's clandestine visit to Freud at 19 Berggasse in Vienna. Of these, many photographs depicting the psychoanalyst's practice and art collection are known, but the artist only took a few portraits of the master. This photographic session was carried out at the request of August Aichhorn and bears witness to the last moments of the birthplace of psychoanalysis, a discipline from this point forward banned by the Nazi regime:

“On Sunday 13 March, a meeting of the management committee of the Viennese Psychoanalytical Society took place and two decisions were taken: all members of the Society must leave the country as quickly as possible and the headquarters of the Society must be at the place where Freud will settle.” (“August Aichhorn et la figure paternelle: fragments biographiques et cliniques” in Recherches en psychanalyse n°1, 2004)
Edmund Engelman in his book entitled La Maison de Freud Berggasse 19 Vienne published in 1979 recounts:
“I remember both my excitement and my fear, that rainy morning of May 1938, as I walked through the deserted streets of Vienna towards 19, Berggasse. I carried my cameras, tripod, lenses and film in a small suitcase that seemed to get heavier with each step. I was convinced that anyone who saw me would know that I was going to see Dr Sigmund Freud, to accomplish a mission that the Nazis would not have appreciated. [...] I was afraid that there was not enough light to photograph the interior of Freud's house. Using flash or spotlights was out of the question as the Gestapo kept the house under constant surveillance. This unique document on the place where Freud had lived and worked over the past forty years, would have to be executed without arousing the slightest suspicion.

I feared for my own safety as for the lives of the Freuds, and did not want to compromise myself by a misstep when they were so close to leaving Vienna safe and sound. [...] One weekend in 1933, at the summer residence of a friend, outside of the city, I had the pleasure of meeting a certain August Aichhorn who was closely interested in the highly controversial field of psychoanalysis and was, to my keen curiosity, a close friend of the famous professor Freud. [...] We quickly became good friends. [...] He confided to me that Freud, after a terrible harassment (raid of his house by the Nazis, detention of his daughter Anna), had finally received permission to leave for London, thanks to the intervention of senior figures and foreign diplomats. The Freuds, he told me, would set out within ten days. The famous apartment and its offices would be disrupted by the move and the departure of the owners. We agreed that it would be of the greatest interest to the history of psychoanalysis to undertake a precious and detailed testimony of the place where it had been born, so that, according to the courageous expression of Aichhorn, “it would be possible to erect a museum when the storm of the years is over”. [...] Knowing my interest and my quality as a photographer, he asked me if I felt able to take photographs of Freud's house. I was enthusiastic. [...] Above all, I was eager to know Freud who had then entrenched himself in his private life and had little relationship with the outside world.” (Engelman, La Maison de Freud Berggasse 19 Vienne, 1979)

The photographer then explained that Freud, very weakened by illness, was supposed to be absent during the photography session, however, “The next day – the third day – while I was about to take some complementary photographs of the office (experiencing there for the first time a feeling of routine), I heard small rapid footsteps approaching. It was Freud. He had changed his usual routine unexpectedly and, returning to his work room, he found me there. We looked at each other with equal astonishment. I was confused and embarrassed. He seemed worried, but remained calm and placid. I simply did not know what to say so I remained silent. Fortunately, Aichhorn then appeared in the room and immediately gauged the situation. He explained to Freud the purpose of my work and introduced me. We shook hands, obviously relieved. [...] I asked him if I could photograph him. He kindly consented and asked me to continue my shooting as I pleased. [...] I even suggested, if it could be useful, and to avoid trouble or wasting time, to take the necessary photos for the passports. [...] Freud, at my request, looked slightly in profile, took off his glasses, and reacted with a smile to one of those remarks that photographers make while they prepare.”

The photograph described by Engelman is without question the one we offer. Despite the very detailed description of this unusual photograph, it has not been preserved for the illustration of the book.

This very rare photographic portrait of the founder of psychoanalysis, however, taken a few days before his exile and revealing the stigma of a cancer that will be fatal to him, is the only image of him revealing a smile.