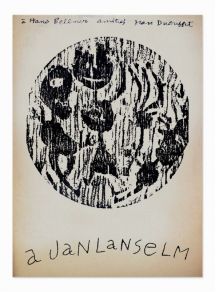 Although art critics and biographers agree in emphasizing an evident heredity, it retains little trace of the interactions between Dubuffet and the surrealists.
Yet it is under the aegis of André Breton and with its full cooperation in 1948 he founded the Society of Art Brut: "The part that is made to you, as you say, this company has of Art gross, it returns you to automatically because your ideas, moods, your impulses, were certainly large part in shaping our minds on this, and it was your cover is placed at the table and if you 'had wanted to take place, it would have remained vacant as the cover of the angel "(letter of 28 May 1948). This relationship, between the first known Dubuffet and a surreal (that is neither future nor a former surrealist) creates an immediate enthusiasm among the artists who develop several joint projects including an Almanac of Art Brut. But in 1951, their relationship disintegrates, Breton disengages the Company and Almanac yet completed, will never be published.
The failure of this collaboration and the burgeoning friendship between the two artists contributes to the final break between the two movements and a growing mutual mistrust.
In wanting to confine Art Brut to the "art of the insane" and so keep the surrealism of supremacy on this "branch", André Breton undoubtedly disappointed the hopes of Dubuffet a natural affiliation between the two movements.
It is however the price of this rupture Dubuffet become one of the major artists of the second half of the twentieth century, while surrealism only survive in difficult war and intransigence of its founder.
The concept of Art Brut, Dubuffet as the formula in 1948, could in fact be part of a theoretical continuity or accept artistic merit:
"Artistic works [...] owing nothing (or minimally) in imitation of the works of art can be seen in museums, exhibitions and galleries, but instead appeal to the original human substance and the The most spontaneous and personal invention; productions which the author has taken all [...] on its own merits "(Jean Dubuffet, Notice Company of Art Brut (September 1948), in ... Prospectus, Volume I, p. 489)
This necessary distancing and anti-surrealist positions taken frequently associated with lack of historical evidence linking him to that movement, have forced scholars and biographers to multiple assumptions relied on the obvious convergence of artists and concepts.
Apart from this brief friendship with Breton, the Surrealists hardly appear in the biographies of Dubuffet. Yet this friendly dedication to one of the most important surrealist artists on this first craft book testifies to its proximity to other members of the movement; a closeness that remains enigmatic because Dubuffet deliberately "forgotten" its ties with surrealism which it is nevertheless one of the main heirs and successors.

Evidenced by this copy of the first book dedicated to Hans Bellmer Dubuffet, we offer on Edition-Originale.com:
Ler dla Canpane
Published phonetic language calligraphy on stencil with linocuts, wood fund and fund camembert boxes, then hand printed by the author on newsprint with 6 prints 150 copies plus 15 copies and engravings enriched 2 wet ink for the "samatere detrase etdanprinte".
The so-called "traces of lovers and fingerprints" will note, however, to our knowledge, Dubuffet has dedicated his relatives that copies "ordinary", according to the same concept that governs this founding work of the Art Brut.

In preface Thumbnails opera glasses, which reproduces engravings in 1962 Ler dla Campane, Dubuffet returns to the genesis of his first book: "Printed with makeshift means, these booklets were taking the whole foot-cons of bibliophile rites. Just the opposite of chilling solemnity that give luxury editions thick, expensive paper, typography great house, ample margins, and the profusion of white pages and guards, they were drawn very modestly with paltry devices in a small size and a paper journal most vulgar kind. It seemed to us (it seems to me) that they were as attractive as is usually offered that the books bibliophiles. "
Leave a comment