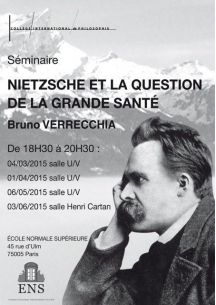 The fourth volume of correspondence Nietzsche covers 1880-1884 years: five years alone, but rich in crises and metamorphoses. Now free of any university attaches, Nietzsche will experience the most painful disappointments in relationships with others, and most sovereign creations with Dawn, The Gay Science, and the new figure of Zarathustra. In the background: nagging, indefinite pain, physical discomfort and permanent psychic who knows only rare remissions (when "holy th J" of 1882); relations more difficult with her mother and her sister Elizabeth; often disappointed and looking for a "place" conducive to writing in Venice - with composer Peter Gast, "Peter Gast" which he admires and defends the music - in Genoa in the anonymity of a largest port in Nice, a little too French town, and in the Engadine, "this unexpected," he discovers, fruitful living summers. In this wandering a little stress between Switzerland and Italy, Nietzsche formulates his innermost thoughts: his affinity with Spinoza, the challenge of the eternal return, the announcement of the superman, criticism of the "last man". But to confide these new perspectives? About what small elite turn? This is the old dream of Nietzsche.
In May 1882 held the fatal encounter with Lou von Salomé in Rome and forms the naive project of a "Trinity" with the cold Paul Bee. This well-documented episode will be a disastrous failure, which will lead Nietzsche to break with his family and friends Wagner and condemned to solitude more irremediable. If the letters demonstrating that pathetic episode reveal the first cracks of his personality, they are also a density of a write elegance and human and intellectual intensity shall undoubtedly one of the most moving letters German language.

We report on this occasion a seminar on "Nietzsche and the question of great health" proposed by Mr. Bruno Verrechia, philosopher and psychiatrist, member of the International College of Philosophy, to be held at the Ecole Normale Supérieure in four meeting in March June 2015:

"The question of a" new "health, great health, which is precisely not the opposite of the disease but is a dynamic principle at the heart of each of our lives, including" good health "and health, anime all thought of the doctor philosopher known how he was attacked by multiple ailments everyday. For Nietzsche, the disease is not life but an invitation objection to the intensification of that --- and constitutes a instrument of knowledge for both the eminent philosopher with that for every ill, within the limits of the possible, facing new challenges of life. This constant advocacy of Nietzsche for a great health, which always involves initially acceptance a consideration of pain or disability as they can teach us, as much dolorism qu'hédonisme excluded. The great health is every time mine, singular and consistent with my own values, and opposes therefore any normative mink or dictatorial good health according to the values ??that would be universal. We propose, in the first movement of this seminar, putting us to listen to the word of Nietzsche, as it unfolds especially in Ecce Homo and The Gay Science, show how great health, far to endorse the canons of good health that is supposed universal and desirable for all, the supposedly benevolent shade assignments health mass speech. "