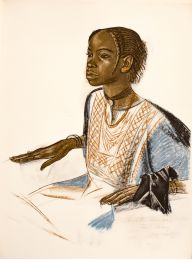 
Dessins et peintures d'Afrique exécutés au cours de l'Expédition Citroën Centre Afrique
[Drawings and paintings of the Expedition Africa Citroën Centre]
Lucien Vogel chez Jules Meynial | Paris 1927 | 20 x 26.5 cm | unbound in chemise with laces
First edition, one of 1020 numbered and dated copies (1st May 1927) on Madagascar Lafuma, the only printing, along with 20 more copies, enriched, on Madagascar.
Chemise and slipcase in light brown «filali de Marrakech» morocco by Felix, inside flaps of beige cloth, ties present, one with small lack.
One fascicule of the text, comprising the notes of the artist during the expedition, illustrated in the margins and with Iacovleff's sketches superimposed, black silk covers with ethnic motifs.
Unbound, 50 plates – one double – hors-texte in colors, engraved by Godde and Chevassus and printed on «croisière noire» watermarked Lafuma.
Small black spots to spine and upper cover, four scratches (from a wildcat trapped in the slipcase?) to foot of lower cover, a little rubbing to head and foot of slipcase.
It was in 1923 that André Citroën, seduced by Iacovleff's «ethnographic» paintings, invited the artist to become the official painter of what would become one of the most famous trans-Africa expeditions, a mixture of mechanical feats, political assertiveness and scientific and cultural project.
Inspired by Napoleon's expedition to Egypt, Citroën recruited for his expedition ethnographers, geologists, meteorologists, zoologists, anthropologists, geographers and cartographers. The expedition, which made the creation of a link possible with such isolated French territories as Djibouti and Madagascar, crossed the Sahara, Niger, Chad, Ubangu-Shari and the Belgian Congo. It was supported by the French state and several large institutions, including the French Geographical Society, the Museum of Natural History and the State Secretariat for Aviation, while the Ministry of Fine Arts charged Iakovleff with «recording, through the brush, indigenous manners and costumes that are in the process of disappearing.»
He made more than 300 drawings and portraits in charcoal, sepia and red chalk. They are very realistic in tone, far from the usual exoticism of the age and contributed, by the very intensity of his art, to the international prestige of the expedition.
In order to spread word as far as possible of the success of his expedition, Citroën organised numerous exhibitions throughout the world as well as showing the film of the expedition made by Léon Poirrier, and having the results of the scientific studies published (including geographical, medical, wildlife management studies, etc), also entrusting Lucien Vogel, the noted publisher of the Gazette du bon ton and Feuillets d'art, with the publication of this luxury edition celebrating the extraordinary drawings of Iacovleff. These were done along the 28,000 km of route traversed between the 28th October 1924 and 26 June 1925 in the depths of sublime Africa.
A very good copy of one of the finest accomplishments of Lucien Vogel and Alexander Iacovleff.