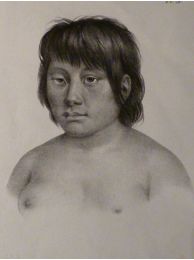 
Original folio lithograph from Voyage pittoresque dans le Brésil by Maurice Rugendas, engraved by Maurin after drawings made from life by the author.
Four views of "Machacari Indian" faces.
In 1821, Rugendas, a painter from Augsburg in Bavaria, obtained a position as draughtsman to the scientific exploratory expedition to Brazil organized by G. Langsdorff, which arrived in Rio de Janeiro in March 1822. He travelled through the provinces of Rio de Janeiro, Minas Gerais, Bahia and Pernambuco. Working according to Herder's philosophy, he was looking for the true nature of the country in the people themselves and in the interior, far from the cosmopolitan civilization of the big cities. His interest in indigenous peoples, widespread among the travelers of the time, led him to make realistic drawings. Rugendas also drew Black people (at the time called "Brown", "Negroes", "Africans" or sometimes "Creoles"), which gives his work a unique anthropological approach at a time when other illustrators ignored Black people, despite the fact that they made up a not insignificant part of the Brazilian population.
His Voyage Pittoresque dans le Brésil began to be published in 1827 in Paris by Godefroy Engelmann, a pioneer of lithography from Alsace.