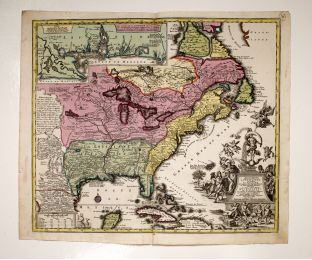 
Augsburg [ca 1730] | 62.6 x 53.3 cm | one map
First edition, full margins, copper engraved, colored in a contemporary hand.
One restored tear to foot of verso slightly touching the right hand side of the title cartouche. This map, very detailed and with a key in French, shows a good part of North America and in particular the Mississippi river and Great Lakes. At bottom left, there is a scale showing «hours by horse» between different points as well as latitudes and longitudes.
A fine copy of this map calling to mind John Law and the Mississippi Bubble. «The cartouche of this map by Matthaeus Seutter (1678-1757) is particularly well crafted. It depicts, in an allegorical way, the sadly famous speculative bubble of the Mississippi Company in 1719. The resources within easy reach that could be exploited in Louisiana had been vastly overvalued and the shareholders swindled and eventually ruined by the campaign of lies orchestrated by the Scottish economist John Law. In the cartouche, Fortuna, the goddess of chance, pours out jewels and other treasures, but she is perched on a bubble, a symbol of precariousness. Beneath, cherubs produce shares in the company with the aid of a printing press while others blow soap bubbles, surrounded by worthless share certificates. Around the pedestal, investors despair, some throwing themselves from a tree, another falling onto his sword, and yet another tearing his hair. Over their heads, an angel holds an empty money-bag. Seutter uses the decoration as a caricature or satire. This allows him to express his sarcastic view on a current topic in one part of the territory he is mapping. The job of mapmakers is often influenced by geopolitics, especially when it comes to tracing borders or the attribution of newly discovered land to one nation rather than another. Political commentary via ornaments remains relatively rare before the fashion for pictorial maps in the first half of the 20th Century» (Alban Berson, «À quoi servent les ornements sur les cartes anciennes?» Carnet de la Bibliothèque Nationale, Bibliothèque et Archives nationales du Québec)