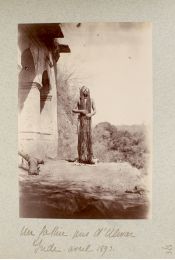 
Photograph album – Ulwar
1894 | 26 x 19 cm | one album
Album bringing together a total of 49 contemporary albumen print photographs (15.5 x 10.5 cm), laminated on thick card and mounted on guards. All of the shots are captioned by hand in the lower margin. Three other albums, containing 196 photographs, were sold at auction when the Viscount's collection was put up for sale by his heirs in 2003.
The album contains 49 photos, of which 29 are village scenes with people and animals (elephants, nilgai, camels, etc.),
8 views of the camp, 5 of people, including a surprising Fakir with high dreadlocks, 4 of the caravan and 3 landscapes. Contemporary binding in half green shagreen, spine decorated with blind tooled fillets and bands, gilt title in the second band, paper boards with several blind tooled frames, the first stamped in the centre with a gilt title.
Some rubbing, slightly worn corners, one of which is more significant, some small white spots. Some loose boards.
This album was put together by Viscount Edmond de Poncins, naturalist and adventurer descendant of Montaigne, during his trip to Rajasthan.
These photographs were taken in Ulwar (the Alwar district in Rajasthan), where the photographer visited in 1894, following his expedition to the State of Kanjut (today the Hunza Valley), the previous year.