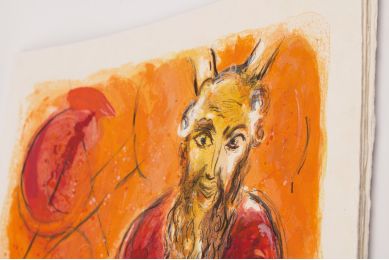 
Original color lithographs, each one of 15 proofs on Japon impérial paper reserved for the artist and his collaborators, the only printing with 20 more on Japan and 250 on Arches paper. Unsigned proofs, as all proofs were in this series, other than the frontispiece.

Superb proofs on Japan paper specially made for The Story of Exodus, published in 1966, for which Chagall made 24 hors-text lithographs printed by Mourlot.
Fernand Mourlot was undoubtedly the finest lithographic printer of the 20th century and was thus the friend and printer to the leading artists of his day. "Picasso, Matisse, Chagall, Miró, Braque, Dubuffet, Léger, Giacometti...added to their own expression and contemporary art a new field of research. With Mourlot, and thanks to him, lithography acquired both a personality and a future" (Pierre Cabanne, in Cinquante années de lithographie).

Having already printed two volumes of the Bible illustrated by Chagall, Mourlot contributed to the artist's lithographic training in the 1950s. It was during this period that Chagall began to visit Mourlot's workshop regularly in order to learn lithographic techniques and that he developed bonds of friendship with the staff of the workshop, most notably Charles Sorlier.
It was thus at the peak of his powers that Chagall made this story of Exodus, which coincided with the termination of his immense lithographic and pictoral work on the Bible, undertaken in 1930 at the urging of Ambroise Vollard. This decorative cycle, entitled Le Message Biblique [The Biblical Message] was in fact the basis for the creation of the Chagall Museum, originally called the Musée national du message biblique Marc-Chagall.

Exceedingly rare original proofs on Japan paper, the most attractive and best for color lithographs.