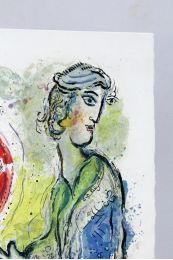 
Original lithograph in colors, one of 15 proofs on Japon Impérial paper reserved for the artist and his collaborators, the only printing along with 20 more on Japan and 250 on Arches paper. Unsigned proof, as with all the proofs in this series except the frontispiece.

A superb proof on Japan paper produced especially for The Story of Exodus, which appeared in 1966 ; the 24 hors-texte lithographs printed by Mourlot were by Chagall.
Fernand Mourlot was undoubtedly the finest lithographer of the 20th century and was thus both printer to, and friend of, the greatest artists of his time. "Picasso, Matisse, Chagall, Miró, Braque, Dubuffet, Léger, Giacometti...enriched both their own personal work and contemporary art itself with a new field of research. With Mourlot, and thanks to him, lithography gained both a personality and a future."  (Pierre Cabanne, in Cinquante années de lithographie).

Having already printed the two volumes of the Bible illustrated by Chagall, Mourlot contributed to the artist's training in the art of lithography during the 1950s. It was during this period that Chagall began to frequent Mourlot's workshop in order to learn about lithographic technique and that he began to make friends with various lithographers, notably Charles Sorlier.
It was thus at the peak of his artistic powers that Chagall produced this story of Exodus, which coincided with the end of his immense lithographic and pictorial labors on the Bible, begun in 1930 at the behest of Ambroise Vollard. This decorative cycle, titled The Biblical Message was later to serve as the basis for the founding of the Musée Marc Chagall, originally known as the Musée national du message biblique Marc-Chagall.

. This illustration of an episode that features as an anecdote in Exodus stands slightly apart in the series, since it focuses on the artist above all else, in whom "the Lord placed the wisdom and intelligence to know and to act."
Whether a self-portrait of the artist as a young Israelite or homage to a painter whose influence was key, this lithograph evokes - both by its subject and its composition - Chagall's old friend, Pablo Picasso. We can see the dove, fauns, and the deconstruction of the human face so typical of the Cubist genius, of whom Chagall said (after their break in 1964): "What a genius, that Picasso is. It's a pity he doesn't paint."
A very rare original proof printed on Japan paper, the most attractive sort, and the finest for color engraving.