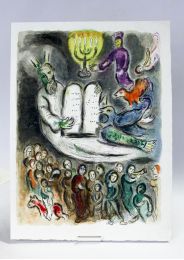 [Les tables de la Loi] Moses then came and called for the elders of the people, and proposed unto them all these things, which the Lorde commanded him. (Puis Moïse vint et appela les Anciens du peuple, et proposa devant eux toutes ces choses-là que l'Eternel lui avait commandées) - The Story of Exodus