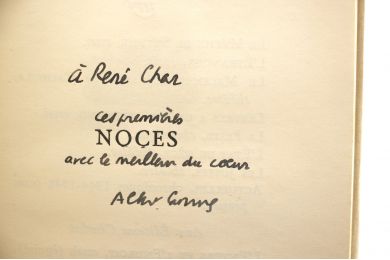 [for René Char, these first Nuptials, from the bottom of my heart, Albert Camus]" .
The friendship between Albert Camus and René Char is among the most touching and most fruitful in French literature.
There was nothing obvious to bring together the Algerian journalist and author and the Provencal poet, much less to suggest a mutual affinity. Camus had not come across Char's poetry and Char had no taste for novels, apart from those of Maurice Blanchot.
Nonetheless, it is through their respective works that the two artists found out about each other and developed a mutual respect. So - before Camus and Char actually met - they had met through Caligula and Hypnos - both illustrating the poet's responsibility in the face of the violent world.
"So in our darkness Beauty has no given space. All that space is for Beauty" (Char, Feuillets d'Hypnos).
It is this mutual need for Beauty as a political response to the outrageousness of ideologies that united the two artists at the end of the war.
Catalyst to their friendship, this first "acknowledgment" inaugurated a twelve-year correspondence, during the course of which their mutual affection grew and revealed an artistic convergence:
"I believe that our brotherhood - on all levels - goes even deeper than we think and feel" (Char to Camus, 3 November 1951).
"What a great and profound thing it is to detach oneself bit by bit from all that and all those who are worth nothing and to find little by little over the years and across borders a community of spirit. Like with many of us, who all at once feel ourselves finally becoming of 'the few'" (Camus to Char, 26 February 1950).
These 'few' are a reference to a quotation from Gide: "I believe in the virtue of small numbers; the world will be saved by a few," whom Char and Camus tried to bring together in establishing the Empédocle review: "It is perhaps time that 'the few' Gide talked about came together," as Camus wrote to Guilloux in January 1949. They published writing by Gracq, Melville, Grenier, Guilloux, Blanchot, Ponge, Rilke, Kafka, and so on. However, internal dissension soon engulfed the review and they abandoned the project together.
Their friendship, however, remained unblemished. The two men met regularly in Provence, where Char was from and - thanks to him - Camus' adopted home.
They showed each other their manuscripts and confided in each other with their doubts: "The more I produce the less sure I become. Night falls ever thicker on the artist's path, his way. Eventually, he dies completely blind. My only hope is that there is still light inside, somewhere, and though he cannot see it, it continues to shine nonetheless. But how can one be sure? That is why one must rely on a friend, one who knows and understands, one who is walking that same path."
They inscribed works to each other (the reprints of Feuillets d'Hypnos and Actuelles) and in each new copy wrote inscriptions in which they both reinforced their comradeship in arms and in spirit.
"to René Char who helps me live, awaiting our kingdom, his friend and brother in hope," (manuscript of The Plague).
"For Albert Camus, one of the very rare men I admire and love and whose work is the honor of our times. René Char," (Fureur et mystère)
"[to RENÉ CHAR], fellow traveler, this guidebook to a mutual voyage into the time of men, waiting for noon. Affectionately, Albert Camus," (Actuelles I)
"For Albert Camus, whose friendship and work form a Presence that illuminates and fortifies the eyes," (Art bref).
"Oh if only poets would agree to become again what they were before: seers who speak to us of all that is possible...If they only gave us a foretaste of virtues to come. Nietzsche."
"To René Char, brother of the undersigned, with whom he has been there all the way, with admiration and affection from his friend / Albert Camus."
This copy was doubtless inscribed in October 1953 along with the other "bound" copies (the Prassinos binding - cf. letter of the 23 October 1953).
Camus had already presented Char with a first copy of this ode to his homeland, first published in 1939, well before their meeting: "To René Char, to bring back for us those years in which I did not know him, but which already held within them the reasons for our friendship."
This second inscription on "these first Nuptials," underlines how this youthful work which celebrates the "nuptials of man with the world," is a precocious revelation of what they would go on to call their "fraternity with the planet".
On Camus' death, Char published La postérité du soleil, the work they wrote together in 1952, an homage to their friendship and to that "hinterland which is the image of our own, invisible to others."
A very attractive copy with an exceptional provenance.

Please contact us 24 hours in advance should you wish to view this book in our shop.