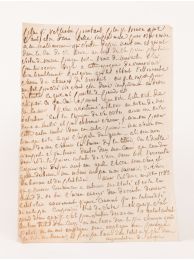 Autograph letter unsigned from the Marquis de Sade to his wife. One page, closely written in ink on 31 lines.
This letter was written during Sade's imprisonment at Vincennes, probably in April 1781, if one is to believe the occasional indicators of date referenced by the writer. Sade mentions the end of his "exile from Marseilles", referring to the decision of the court in Aix-en-Provence to overturn his conviction for debauchery and libertinage on the 14 July 1778, but which nonetheless banned him from living in or visiting Marseilles for three years. Sade also mentions one of the defining episodes of his life, his flight to Italy between January and November 1776: "they may as well have killed me straight off as left me in that foreign country where I was." Sade also mentions the "amazing favor" that befell him of "moving house", which is to say his potential transfer to the fort at Montélimar. In April 1781, Madame de Sade, through the good offices of her friend Madame de Sorans, got authorization from the King for her husband to be transferred to the prison there. Sade explains in the letter: "I think you have to have quite a nerve to dare write to a poor suffering unfortunate who has been beset these nine years...telling him to thank, ever so humbly, the woman who obtained for him the amazing favor of moving house." Sade is here no doubt referring to the famous Madame de Sorans, a lady of Louis XVI's sister's bedchamber and a friend of his wife's who, out of a spirit of adventure, accepted the task of petitioning the King in his favor.
It was to Commissioner Le Noir, referenced in this letter, that Renée-Pélagie left the task of breaking the news to the prisoner: "Ah, I see now what this nice little visit by M. Lenoir means, I'm used to seeing him in the middle of my incarcerations." Despite the fact that, as Pauvert points out in Sade vivant, this change of "house" occupied the Marquis' thoughts to a large extent, he was never actually moved, preferring to stay in the gaols of the keep at Vincennes. At this point, Sade had been imprisoned for several years and this letter, full of movement, reveals his thirst for freedom.
This letter was written when Madame de Sade withdrew to the convent at Sainte-Aure. If she saw this act as a liberation from the yoke of her marriage, the Marquis for his part was obsessed by the idea of his own liberation and mentions a potential date: October 1783. His long incarceration, which began in 1777, would last till April 1790, when lettres de cachet were abolished. Madame de Sade's visits were not reauthorized by the prison authorities until 13 July 1781, after four years and five months of separation.
Several important themes in Sade's correspondence already appear in this letter from his first years in prison. First of all, his hatred for his mother-in-law, the Présidente de Montreuil, an "execrable wretch who drinks [my] blood...disgraces [her] children, who has not yet done scattering her horrific deeds and platitudes" and whom he would like to "drown alive". The Marquis also complains of his poor physical health: "my head spins and in my condition I hardly need any more misery", using very Sadean epithets to express his despair. "A poor suffering unfortunate who has been beset these nine years"; "what have I done, what have I done dear Lord, to suffer for twelve years?".
Provenance: family archives.