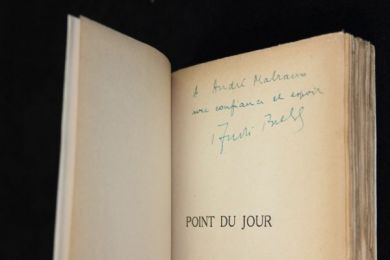 
First edition, of which there were no large paper copies, a service de presse (advance) copy.

With an exceptional inscription from André Breton to André Malraux: "à André Malraux avec confiance et espoir. André Breton [For André Malraux with confidence and hope. André Breton]".
A surprising meeting of two writers who were "by nature fundamentally dissimilar." Nonetheless, Malraux's and Breton's destinies crossed at least twice. The first time was in 1924 when Malraux, then a young and practically unknown author, was arrested over the Angkor affair. Breton received Clara Malraux at his home and offered her his help in getting Malraux out, making his case in "Nouvelles littéraires": "We learned from the paper that the young author of Lunes en Papier [Paper Moons]...has pleaded "guilty" of the appropriation of two or three stone dancers in a practically unknown temple on the outskirts of Angkor. But who really concerns themselves with the conservation, in their country of origin, of these works of antiquity? I don't want to know, but I can well imagine without exaggeration that...André Malraux...will find himself...prevented from creating a more valuable work than the one he endangered."
It was in 1934 that the two men met following the riots on the 6th February. André Malraux signed the "Call to Arms" and "Inquiry into Unity of Action" put forth by Breton against the "very real Fascist menace which showed itself in France on the 6th February." His taking this stand led to the creation of a "Committee of Vigilance of Anti-Fascist Intellectuals," to which both writers belonged. From this shared engagement was born a discreet but lasting friendship. Breton, thus, quoted Malraux's speech to the Congress of Soviet Writers more than once. After the war, he paid homage to Malraux twice, calling him "one of the best qualified spirits of the age."
A handsome inscription that makes reference to their shared struggle and a Surrealist premonition of the title of Malraux's forthcoming great anti-Fascist novel.