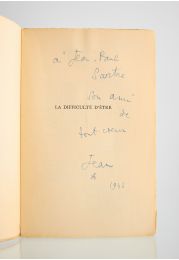 COCTEAU Jean. La Difficulté d'être [The Difficulty Of Being]
Paul Morihien, Paris 1947, 11,5 x 17 cm, original wrappers with custom slipcase
The first edition, an advance [service de presse] copy.
A fine inscription from Jean Cocteau to Jean-Paul Sartre: "son ami de tout cœur [your true friend]."
Despite not being of the same generation, and despite everything that could have separated them, Jean Cocteau and Jean-Paul Sartre were friendly in the late 40s and early 50s. When Sartre died, Jean Marais evoked their regular telephone calls and dinners with endless, wonderful discussions.
The two also worked together for recognition for Jean Genet and in July 1948 published an open letter together in Combat, addressed to the President of France, Vincent Auriol, urging the release from prison of the poet-thug. A few years later, Cocteau would help Sartre set up a committee of support for Henri Martin, a Communist protesting against the war in Indochina, sentenced to five years in prison for distributing pamphlets. Cocteau also took part in the staging of Sartre's Dirty Hands at the Théâtre Antoine in 1948.
In giving the high priest of Existentialism an inscribed copy of The Difficulty of Being, the indefatigable dandy was giving him one of his most intimate pieces. In this work, Sartre's political engagement is evoked in poetic terms: "but why does he insist on visible engagement? The invisible engages so much more...Poets engage themselves without any goal other than to lose themselves."
Rare testimony of the links between two major figures of the 20th century intellectual and literary world.