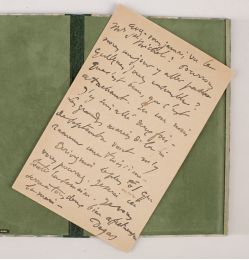 Unpublished signed autograph letter from Edgar Degas to an unknown correspondent. 4 pages in black ink on one folded sheet. Central fold inherent to the way the letter was folded.his letter is presented in a chemise and case with paper boards decorated with abstract motifs, the spine of the chemise in green morocco, pastedowns and endpapers of green suede, slipcase signed by Thomas Boichot.
A handsome unpublished letter, testimony to Degas' other great passion after dance: song.he Parisian premiere of Ernest Rayer's Wagnerian opera Sigurd took place on 12 June 1885 at the Opera de Paris. Degas, overcome by the performance of the singer Rose Caron, saw the piece thirty-seven times: «I still love Sigurd and I like it more and more. I have never seen Reyer except once, in the street. And I made a point of telling him of the admiration it provoked in me far more immediately than in someone who, being neither maid nor washerwoman, was worthy of some consideration.» Degas paid homage to the beauty of Rose Caron in Sigurd by doing two drawings on fans, today in private hands in the US.Properly obsessed by this «admirable work that did [him] so much good, that [he] could not get over», the painter asked his famous neighbor to play him the score on the piano: «The young [Jacques-Emile] Blanche, our neighbor, plays it to me every day, in place of your wife.»he letter closes with a lyrical description of Mont-Saint-Michel, of which Degas had made several drawings: «Have you ever seen Mont-Saint-Michel? Could we go and spend a few days there together sometime? It's so pretty, so charming. In one month, I've been twice. The big tides at the end of September will take me back once more.»
Degas' passion for opera is the subject of an exhibition for the 350th birthday of the Paris Opera, open from 24 September 2019 to 19 January 2020 at the Musée d'Orsay.