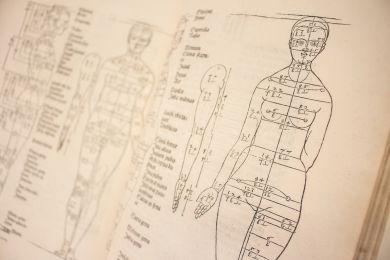 
Albrecht DÜRER
Alberti Dureri clarissimi pictoris et geometræ. De sym[m]etria partium in rectis formis hu[m]anorum corporum
In aedibviduae Durerianae [Hieronymus Andreae] | Norimbergae [Nuremberg] 1532 | in-folio (20.5 x 32 cm) | (80) f. (A-E6, F4, G-N6, O4) | full parchment
First edition of the Latin translation created by Joachim Camerarius, the work appeared in German in 1528 under the title Vier Bücher von menschlicher Proportion. Our edition contains the first two books, the following two will be published in 1534 under the title De varietate figurarum et flexuris partium ac gestibus imaginum. We will have to wait until 1557 for Louis Meigret's French translation to be published.
Our edition is illustrated with 85 large wooden insert illustrations and many other smaller in-text illustrations, the same as those used in the original German edition. The title page shows Dürer's well-known monogram. Gothic text. The last white leaf, missing in most copies, is present here. Large, greatly fresh margined copy.
Full parchment with preserved laces.
Very beautiful copy of the most sought-after of Albrecht Dürer's technical works.
The illustrations required the examination of several hundred male and female models and - something rarer for the time - children. These extremely precise analyses resulted in anthropometrical impressionist drawings showing the human body as a whole, and also in detail (hands, feet, heads, etc.). Each drawing, squared or scaled in the margin allows the models to be easily reproduced, the book being intended to avoid errors of proportion for young artists.
Joachim Camerarius' Latin translation - humanist and close friend of the author - had at the time an essential role: it gave Dürer's work, until then written in archaic German, a significant audience; without Camerarius, Michelangelo would never, for example, have known of Dürer's theory of proportions.
Dürer - whose godfather Anton Koberger published La Chronique de Nuremberg in 1493 - frequented the world of printing and engraving very early on and unlike his contemporary Florentine Leonardo da Vinci who published nothing, he produced several theoretical treatises. It was during a trip to Italy in 1494 that he met Jacopo de' Barbri (1445-1516) who introduced him to the role of mathematics in perspective and the study of the proportions of the human body. On returning to Germany, he opened a workshop, became the painter of Maximillian I of Habsbourg and joined the Great Council of the city of Nuremberg. Recognition is complete and Dürer becomes an internationally known artist, with the knowledge and ability for well-received thought.
In the last years of his life, not abandoning the pictorial arts, Dürer, encouraged by his humanist friends, spends most of his time writing. Determined to leave the results of his long theoretical thoughts for posterity, he publishes several treatises: Instruction sur la manière de mesurer (1525), Instruction relative aux fortifications des bourgs, villes et châteaux (1527) and finally Traité des proportions du corps humain (1528).
In keeping with the artistic considerations of the Renaissance, the intention of this last treaty is to establish a scientific basis (geometrical and arithmetical) applied to aesthetics and thus to provide practical guidelines aimed at achieving anatomical perfection.
A true artistic testament, this emblematic work will have a considerable influence on the history of Western art.