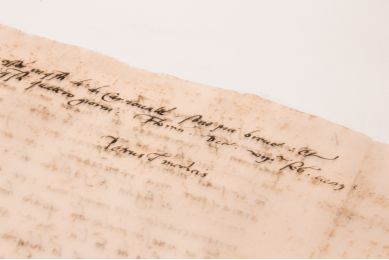 
Oratio in funere Laurentii de Medicis habita. With an autograph letter signed by Piero II de' Medici to Dionigi Pucci
Philippus de Mantegatiis, Milan n. d. [after April, 8, 1492], 20,8 x 13,8 cm, (8 f.) Sig: a8, later morocco & for the letter n. d. [1493], 22 x 30 cm, 1 page and a few lines on a folded leave
First edition of the eulogy of Lorenzo de' Medici, said by Aurelio Bienato, bishop of Martorano (Catanzaro, Calabria), on 16 April 1492 in the church of Santa Maria la Nuova in Florence, eight days after the prince died. This eulogy is followed by a short eight-verse poem. This is the only printed eulogy of Lorenzo the Magnificent (John McManamon, Funeral Oratory and the Cultural Ideals of Italian Humanism, 1989).
Bound after the 19th century, full red morocco, spine framed with gilt fillet and blindstamped, full title, large lace pattern frame and double gilt fillet framing the inside cover.
Several brackets and handwritten notes from then.
Ex-libris from the Prince Piero Ginori Conti (1865-1939), an Italian businessman and politician, coated on the first inside cover. Ex-libris embossed with the stamp of the Gianni de Marco Library.
Opposing a complete different approach form the usual laudatory praises, Aurelio Bienato introduces Lorenzo the Magnificent as a modern prince, a European model, a patron of arts and literature, but also a guarantor for peace in Italy.
The purpose of his text is above all political: he underlines and praises the recent diplomatic ties between Florence and Naples, enabling Lorenzo the Magnificent to establish his power over the Florentine city.
This volume comes with an autograph letter signed by Piero de' Medici, son of Lorenzo the Magnificent, addressed to Dionigi Pucci, himself a diplomat and friend of the sender. 28 lines written in a fine and slim writing. Address of the recipient at the back of the second leaf. Wax seal marks. Light brown spotting. In this letter Piero the Unfortunate confesses his allegiance to Ferdinand II of Aragon, king of Naples.
In reality, as he was writing this letter, he had already reached a neutrality agreement with Charles VIII King of France who was about to capture by force the realm of Naples he considered his. Despite this agreement, Piero II de' Medici was nonetheless compelled to surrender unconditionally and seek exile in Venice: this is the beginning of the first Italian war. In two years on the throne, he destroyed everything the Medici dynasty had built during the former century.
Rare collection of documents evoking the climax and the dawn of decay of the mighty Medici dynasty, the most influential family of the Italian Renaissance.