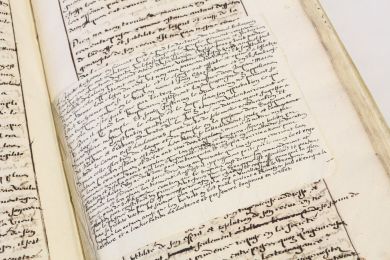 Handwritten, unpublished manuscript signed «Jean Quatresolz» on the first page of the preface. A piece of loose paper on the inside of the manuscript mentions the date: 1668.
Jean Quatresolz, Lord of Coubertin and advisor to the king, is a cousin of Jean de La Fontaine and was undoubtedly rather close to the fable writer since he seems to be his sister Anne de Jouy's godson.
Full parchment contemporary binding. Signs of laces.
Important manuscript that remained unpublished, dealing with the study of the human heart from anatomical, moral and theological angles.
After Harvey's experiments in the early seventeenth century, who based his observations on experimentation, Quatresolz presents a mystical vision of the heart, for example finding justification for the divine creation of the heart's sequencing that he compares to the sun: «The sun is the heart of the world, and the heart is the sun of man». However, the author does not stick to simple formulas, he analyses the composition of the sun and the body and seeks to prove their analogy, pointing out that God having put the sun as the centre of the life in the world, placed the heart in the human body in the same way. He uses the same method for feelings and morals that are the moral consequence of the organic composition of the heart. The author professes that there are two schools in approaching the heart, naturalists and morals. According to his thesis, to understand both man and God, it is necessary to appreciate both approaches simultaneously. After an enlightening preface on the human heart, the author precisely studies its anatomy, abundantly quoting the Italian and English recent discoveries, as well as the doctors of the past.
A second part is dedicated to the heart's spiritual approach and to passions. However, throughout the entire manuscript, Quatresolz constantly mixes the bodily and spiritual approaches. This analogy, the essence of his reasoning, of course evokes the mechanism of his famous cousin's fables, who creates a parallel between nature and society.
However, if the fable writer invents his analogies between man and the beast, Quatresolz rigorously applies the concept of unity to divine creation and, confronted with the great anatomical discoveries of his time, tries to solve the complexity of the world, which suddenly destabilises the foundations of Christian thought.
The organic heart must be the spiritual heart, each one dependent on divine creation. The book finishes with a prayer to God after the table of contents.
Extremely interesting manuscript that shows that the approach to medicine could turn its back on theology overnight and a certain vision of man during the seventeenth century.