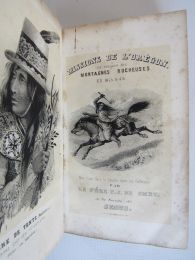 
Missions de l'Orégon et voyages dans les Montagnes Rocheuses en 1845 et 1846
First edition in French, translated by Bourlez. Smet's father also produced a translation in an edition published in Ghent, also in 1848. Two-tone lithographed frontispiece and frontispiece-title on China paper. 12 two-tone lithographic plates on thick paper showing the lives of Native Americans.
Half dark brown sheep. Spine with mock-bands with three Romantic blindtools and gilt roulettes. Upper joint cracked at head and foot and rubbed. Leather tail-piece worn away, revealing cardboard. Leaves 251 and 253 detached. Scattered spotting. Covers and edges rubbed.
The work is the account of a journey by Smet, a missionary Jesuit priest, along the Colombia river, which runs from Canada to the United States. Smet undertook this voyage to the Athabasca river, arriving at Fort Augusta on the 1st January 1846. On another trip, he went back to Fort Vancouver. He finally left again in July and stopped at the mission of Saint Marie before travelling down the Missouri. The work contains a deal of information on the area of Oregon and on Native Americans, including their costumes, habits, and beliefs.
NB : This work can be viewed at the bookshop with 48 hours' advance notice.