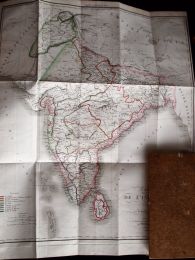 Member of a family who lived in India for nearly a century, Collin Bar was governor of France in Pondicherry, he was imprisoned for eight years during which he conceived this book. After a general description of India, antiques, religion and its laws, its manners and its uses, it traces the history of ancient and modern India, and European rivalry, mainly those of France and England, and that until 1810; the book ends with a picture of the current state of India and foreign domination.