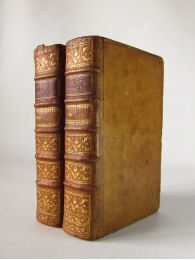 
First edition. The first volume is from the pen of Mentelle, the second from La Croix. The work was ly attributed to Gabriel Mailhol by Barbier and Cioranescu, but it is a legitimate mistake, the two bibliographers having confused this edition with a homonymous edition of 1752. An autograph letter of Mentelle, discovered recently, proves that he is the author.
Binders in full blond calf and iced vintage. Back with ornate nerves. title labels in red morocco, and tomaison in morocco green. A lack at the head of the volume I. Coins slightly blunted. Traces of friction in caps, nerves, bits, borders. Nice copy overall.
First part, Containing the ancient kings of Persia, and the different Persian, Turkish and Mogul dynasties, which rose successively in Asia, even to the Caliphs and the Sophis exclusively. Second part, containing the Kings of Persia, the Sophis Dynasty, the Mughals or Emperors of Hinspinetan, and the Turkish Sultans of the Ottoman family, from the foundation of these great Empires to the present day.
Chronological history of Persia. The book is part of the excellent collection of Anecdotes, which allowed to have the essence of the history of a nation in little place and in an accessible knowledge.