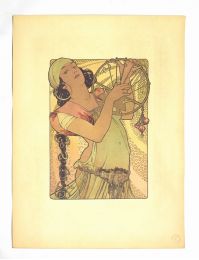 Rare color lithograph heightened in gold by Alphonse Mucha for L'Estampe Moderne, series number 2, published in June 1897.
One of 50 grand luxe proofs printed on Japan paper with wide margins, signed by the artist in the stone, publisher's embossed stamp showing a child in profile to lower margin, numbered stamp of the de luxe printing to verso, upper margin of proof slightly sunned; the print itself preceded by a silk paper guard with the name of the artist, the title of the work and an introduction to the work as well as a blank guard leaf.
A magnificent monthly French publication that appeared between May 1897 and April 1899, L'Estampe moderne comprised unpublished chromolithographs that, unlike those in other magazines like Les Maîtres de l'Affiche and as is stipulated on the guard sheets, were specially made by each artist for the magazine. There are thus 100 prints that appeared in total, covering the major artistic currents of the late 19th Century: Symbolism, Art Nouveau, the Pre-Raphaelites, Orientalists and the Belle époque. Each fascicule of four prints was printed in 2,000 copies and sold for 3.50F, with 100 on Japan paper sold at 10F. Henri Piazza also planned a very luxurious secret printing of 50 copies on Japan paper with wide margins and 50 in black and white on China paper at the considerable price of 30F.
This well-sized print is superbly printed in colors on the most prestigious of papers: Japan. Thick, creamy, satin and with a nice sheen, it contributes to making each page a work of art in itself. Its absorptive qualities for ink and its affinity for colors make it the ideal support for these lovely lithographs.
The interest of French collectors for artistic posters grew from the beginning of the 1890s. Octave Uzanne invented a term for this growing interest: affichomanie, or poster mania. The poster, originally not rare and posted up in the streets of the capital, thus became a work of art and its ephemeral background became precious and essential for conservation.
Piazza decided to extract the poster from its advertising role and to elevate it to a form of art, similarly to luxury illustrated artists' books. He thus put together a prestigious collection of entirely original works by the most fashionable European artists of the age: Georges de Feure, Eugène Grasset, Henri Detouche, Emile Berchmans, Louis Rhead, Gaston de Latenay, Lucien Lévy-Dhurmer, Gustave-Max Stevens, Charles Doudelet, Hans Christiansen, Henri Fantin-Latour, Steinlen, Ibels, Engels, Willette, Henri Meunier, Evenepoël, Bellery-Desfontaines, Charles Léandre, etc.
He also included in this project a Czech artist freshly arrived in Paris, Alfonse Mucha “who has only recently become active in France but who has immediately carved out for himself the affection of the public. Like in his posters, which everyone knows and covets, he shows us here the varied resources of his multifaceted talents as accomplished draughstman, decorator and colorist” (from the notes printed on the guard for Salomé). The two first special numbers of the review were in fact dedicated to him, and were given to “all the subscribers for all twelve annual numbers of L'Estampe moderne” as well as the famous illustration of the covers.

A fine signed plate by the master of Art nouveau.