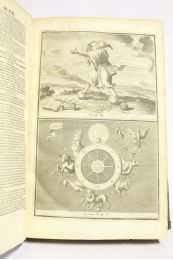 
New edition revised, corrected and augmented with many historical dictionary, followed by two volumes of the Supplement. The first edition was only published in the lifetime of the author, in 1664, in a folio volume.
Our copy is unfortunately not complete the frontispiece engraved by Claude Duflos after Desmarets neither the author's portrait also engraved by Duflos. Title pages in red and black.
Binders of the time in full brown calf, back with six nerves decorated with gilded boxes and triple tail golden threads, parts of title and volume number in brown calf glued on the back, decorated with golden flower and framed double -filets golden, golden wheels on the cuts, all sprinkled edges red. boards very rubbed, caps often rubbed or leveled, small head wormholes backs of all volumes except the first volume of the Supplement several corners bumped.
Published for the first time more than a century before the Encyclopedia, The Great Dictionary of Louis Moreri (1643-1680) is already looking to embrace more areas of knowledge between Sciences and Arts. Work recognized when for its wealth and erudition, his major challenge is to adopt an encyclopedic point of view to deal with subjects as diverse as history, geography, genealogy and religion. This effort is welcomed by publishers in the Epistle to the King, in which the book is described as "the Compendium of History richest & most extensive that we have seen seem."
Work well complete reference of the two volumes of the Supplement.