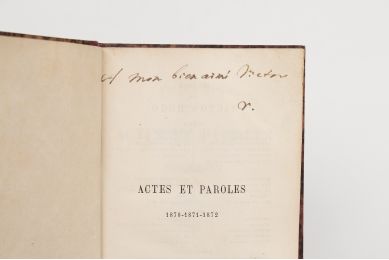 
First edition on current paper, it was printed 100 copies on Holland paper in large papers.
Binding half shagreen red, back with four purposes nerves set with golden dots adorned with gilded fleurons and nets cold patches of marbled paper, guards and contreplats of handmade paper, speckled slices, Contemporary binding signed Derveaux son.
Rare foxing mainly affecting the margins of some leaves.
Exceptional autograph signed by Victor Hugo to his son François-Victor on the fake title page: "To my beloved Victor. V. »
In 1872, only two of the five children that Victor Hugo had with his wife Adèle Foucher are still alive: François-Victor, whom he calls simply Victor and on whom he defers his affection, and Adèle, walled in madness, who has just been interned on his return from Barbaspine. Hugo notes in his notebooks: "Just a year ago, I was leaving for Bordeaux with Charles [his other son] who was not going back alive. Today I see Adele again. What shagreen! But the tragedies will continue to strike the old writer: the "beloved" Francis Victor will succumb the following year, in 1873, tuberculosis.
François-Victor Hugo is the author of a monumental translation of the complete works of William Shakespeare, the first respectful of the language of the English playwright: "For those who, in Shakespeare, want all Shakespeare, this translation was missing", wrote with emotion Hugo in the preface.
Nice copy enriched with a very moving dedication of Victor Hugo to his son.