Baudelaire & Hugo: the story of this tempestuous meeting between the Albatross and the Ocean Man 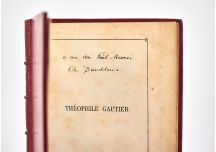 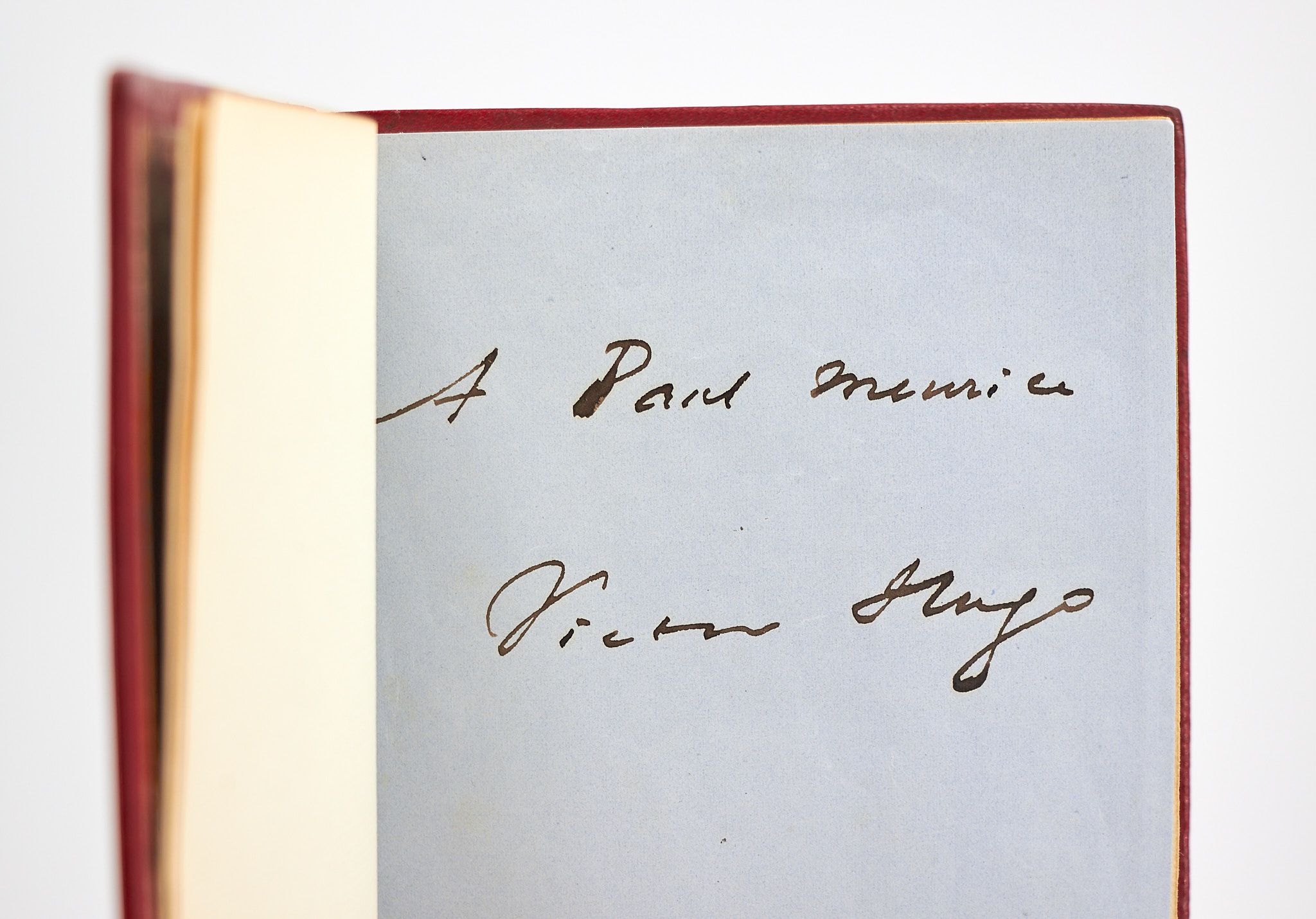 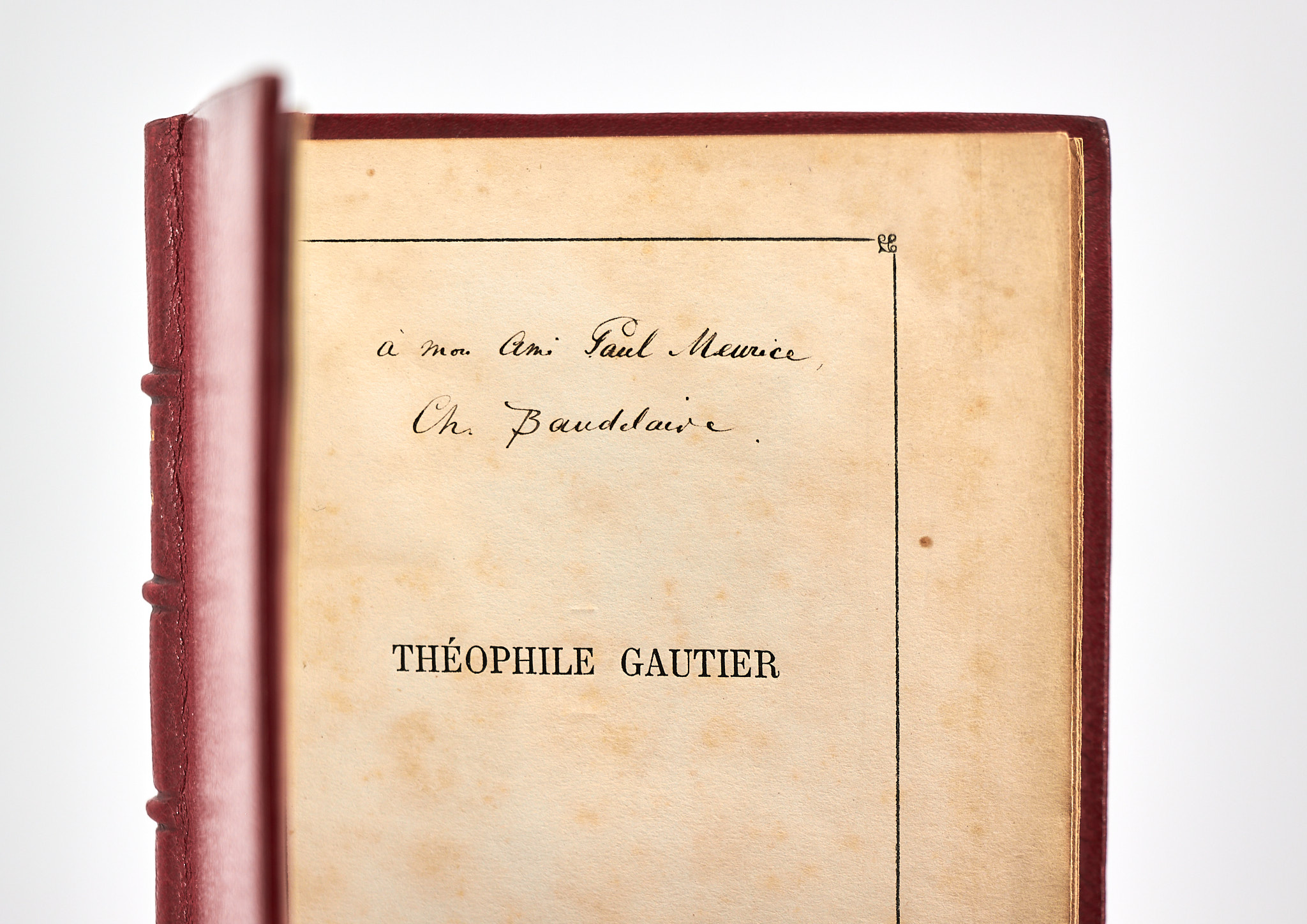 Paul Meurice was indeed the essential intermediary between the condemned poet and his illustrious exiled peer, since asking Victor Hugo to combine their names in this Théophile Gautier elegy was one Charles Baudelaire's most daring acts and would, no doubt, not have had a chance of being realised without Paul Meurice's precious support.
Paul Meurice, Dumas' ghost-writer, author of Fanfan la Tulipe and the theatre adaptations of Victor Hugo, George Sand, Alexandre Dumas and Théophile Gautier, was a talented writer who was shadowed by the great artists of his time. His unique relationship with Victor Hugo, however, gave him a decisive role in literary history. More than a friend, alongside Auguste Vacquerie, Paul replaced Victor Hugo's deceased brothers: “I lost my two brothers; him and you, you and him, you replace them; only I was the youngest; I became the eldest, that's the only difference.” It is to this brother at heart (whose marriage he witnessed alongside Ingres and Dumas) that the exile entrusted his literary and financial interests and it is he who he will appoint, along with Auguste Vacquerie, as executor of his will.
After the poet's death, Meurice founded the Maison Victor Hugo, which is still today one of the writer's most famous residences.

In 1859, Paul's house then became Victor Hugo's Parisian antechamber on the Anglo-Norman rock, and so naturally Baudelaire went to speak to this official ambassador. The two did not know each other well but they had a mutual friend, Théophile Gautier, with whom Meurice had worked since 1842 on an adaptation of Falstaff. Consequently, he is the ideal intermediary to guarantee the inaccessible Hugo's benevolence.

Baudelaire had, however, already briefly met Victor Hugo. At the age of 19 he asked for an interview with the greatest modern poet, whom he had worshiped since childhood:

“I love you as one loves a hero, a book, as one loves everything beautiful purely and without interest.” He already dreamed of himself as a worthy successor, as he tacitly confessed to him: “at nineteen years old would you have hesitated over writing as much to [...] Chateaubriand for example?”


For the young apprentice poet, Victor Hugo belonged to the past, and Baudelaire will quickly want to free himself of this heavy model.

From his first work, Le Salon de 1845, the iconoclast Baudelaire criticized his old idol by declaring the end of Romanticism, of which Hugo is the absolute representative: “These are the last ancient ruins of romanticism [...] It is Mr Victor Hugo who lost Boulanger - after having lost so many others – It is the poet who caused the painter to fall into the pit.”

One year later, in Le Salon de 1846 he reiterated his attack even more fiercely, removing the Romantic master from his throne:


This murder of the father could not be fully realised without a substitute figure. It is Théophile Gautier who will serve as the new model for the young generation, whereas Victor Hugo, soon to be exiled, will no longer publish anything other than political writing for almost ten years. So, when Baudelaire addressed a copy of his Fleurs du Mal to Victor Hugo, he knew that he was inflicting on him this terrible dedication printed at the top “To the impeccable poet to the perfect magician of French letters to my very dear and very revered master and friend Théophile Gautier.” The young poet's animosity could not have escaped Victor Hugo. And no doubt Baudelaire did not expect this bright answer from Victor Hugo: “Your Fleurs du Mal radiate and dazzle like the stars.” 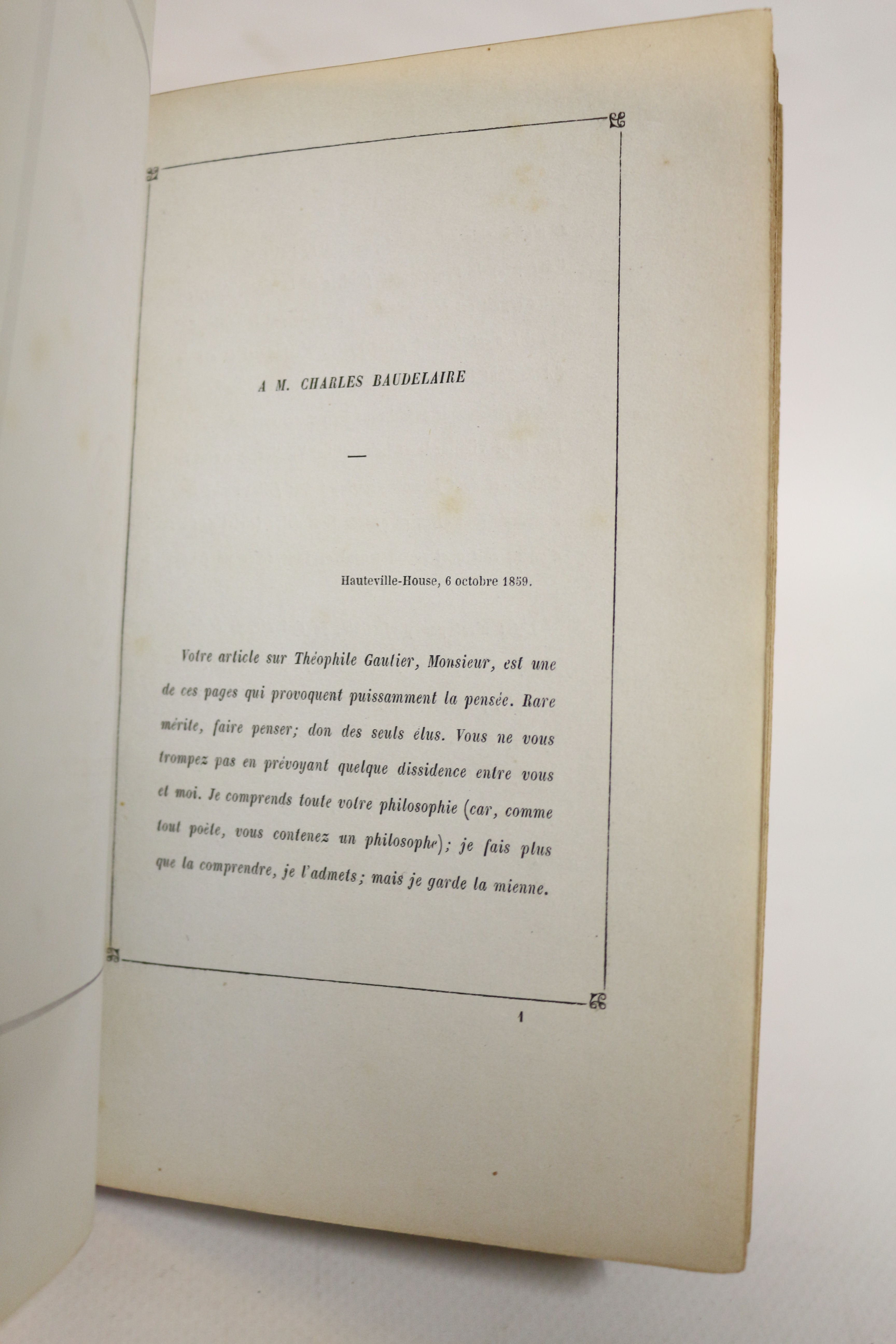 With his article on Théophile Gautier published in L'Artiste on 13 March 1859, Baudelaire always pursues the same goal: to turn the “Victor Hugo” page of the history of French literature.
More skilful and more respectful than his previous writing:

“Our neighbours talk of Shakespeare and Gœthe, we can respond to them with Victor Hugo and Théophile Gautier!”, Baudelaire's prose is intended to be clear and definitive: Hugo is dead, long live Gautier, “this writer for whom the universe will envy us, as it envies us Chateaubriand, Victor Hugo and Balzac.”

The critics were not mistaken and the article's reception was icy. Baudelaire then had the crazy idea of involving Victor Hugo himself in his own removal and publishing, under their two names, the arisen of a new poetic era, of which this booklet is the manifesto.
By his own admission, the impertinent poet had already “committed this tremendous impropriety [of sending his article to Victor Hugo on] paper printed without enclosing a letter, a given tribute, a testimony of respect and loyalty.” There is no doubt that Baudelaire wanted to deliver a blow to his elder. The matter would certainly have persisted without Paul Meurice's intervention. He informed the hot-headed poet of the master's benevolent appreciation, who would have responded with an undoubtedly kind, but definitively lost letter.

Learning this, Baudelaire in turn wrote an incredibly audacious and sincere letter to Victor Hugo:
“Sir, I greatly need you, and I invoke your kindness. Several months ago, I wrote a fairly long article about my friend Théophile Gautier which caused such laughter amongst fools that I saw it fit to make it into a little brochure, if only to prove that I never repent. - I requested the people at the newspaper send you a copy. I do not know if you have received it; but I learnt from our mutual friend Mr Paul Meurice, that you were good enough to write me a letter, which has not yet been found.” He plainly reveals his intentions, denying neither the impertinence of his article, nor the profound reason for his request: “I especially wanted to bring the reader's thought back to this marvellous literary era of which you were the true king and which lives in my mind as a delicious memory of childhood. [...] I need you. I need a louder voice than mine and than that of Théophile Gautier, - your dictatorial voice. I want to be protected. I will humbly print what you deign to write to me. Don't be shy, I beg you. If you find something to blame in these tests, know that I will show your condemnation obediently, but without too much shame. Your criticism, is it not yet a caress, because it is an honour?”
He did not spare even Gautier, “whose name served as a pretext to my critical considerations, I can confess confidentially that I knew the shortcomings of his surprising mind.”

Naturally, Baudelaire entrusts his “heavy missive” to Paul Meurice. Not doubting a positive response, “Hugo's letter will undoubtedly come Tuesday, and magnificent I believe it” (letter to Poulet-Malassis, 25 September 1859), Baudelaire takes particular care to highlight the prestigious preface writer, whose name will be printed in the same font size as his own.
However, the letter is slow to arrive and it is again to Meurice that Baudelaire complains: “It is obvious that if any reason prevented Mr Hugo from meeting my request, he would have let me know. I must then assume an accident.” (Letter to Paul Meurice on 5 October 1859). Indeed, Victor Hugo had sent his preface-response, it arrives shortly after and Baudelaire fully prints it at the head of his Théophile Gautier.

It was not, however, a simple preface, but a real response, written with all the master's elegance. Hugo is not satisfied with the heavy attributes that Baudelaire offers him, Baudelaire who, in this same work, so describes the poet of Contemplations: “Victor Hugo, great, terrible, vast like a legendary creation, cyclopean, so to speak, represents the enormous forces of nature and their harmonious struggle.”

To Baudelaire's manifesto:
“Thus the principle of poetry is, strictly and simply, human aspiration towards a superior Beauty. [...] If the poet pursues a moral goal, he diminishes his poetic force (..) Poetry can not, under pain of death or decline, fit in with science or morality; it does not have the Truth as its object, it only has Itself.”

Hugo opposes his own precepts:
“You are not mistaken in foreseeing some dissidence between you and me. I never said Art for Art; I always said Art for Progress. [...] The poet can not go alone, he needs man also to travel. The footsteps of humanity are therefore the same as the footsteps of Art.”

With all due respect to Baudelaire, the writer that he categorised in the “delicious memories of childhood” is far from having completed his vast work. It is in this little booklet of one of his fierce adversaries, that Hugo announces the path of his future writing: La Légende des siècles, which should appear this same month, and certainly three years later, Les Misérables, the most important social and humanist saga in world literature. 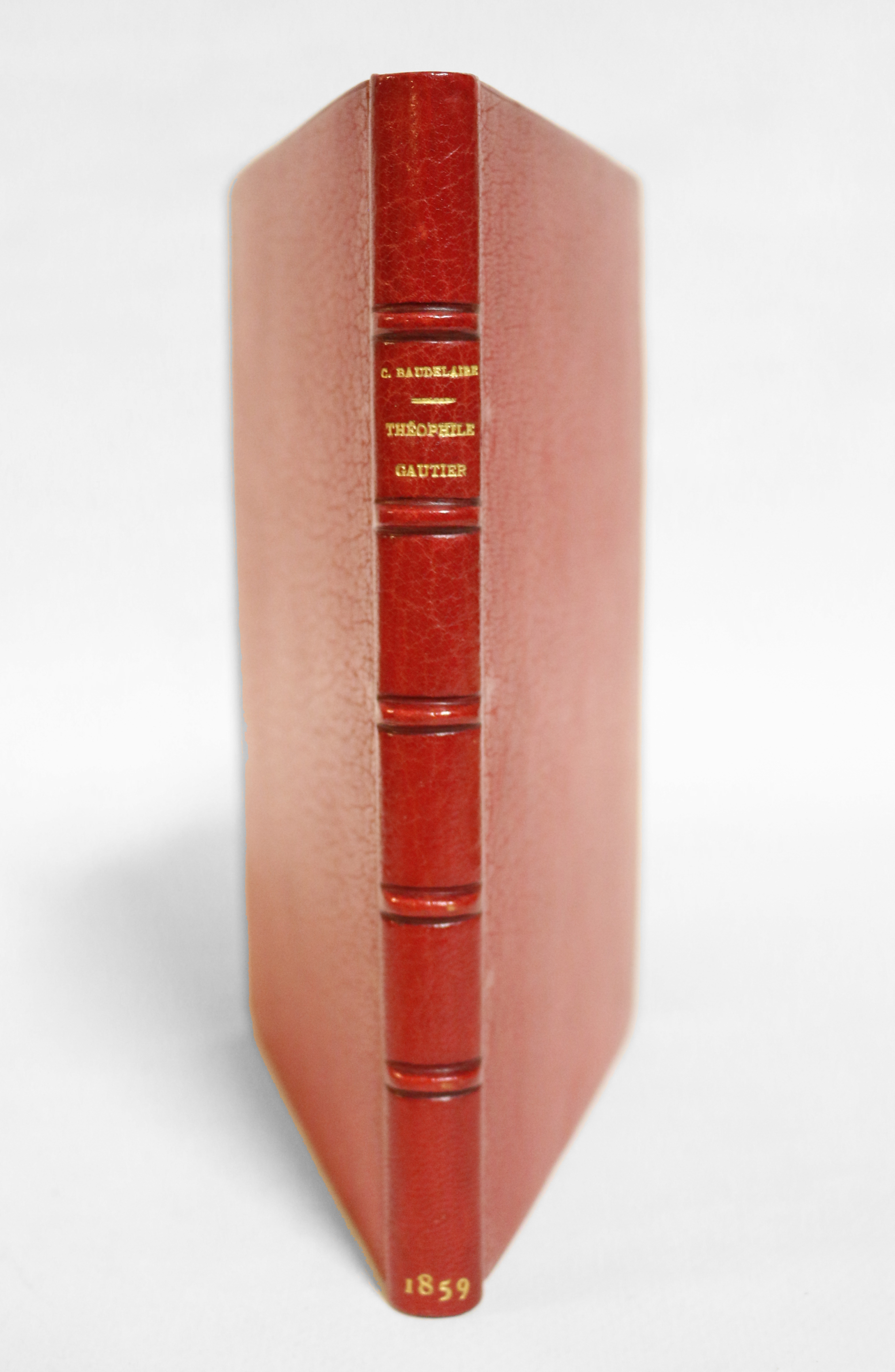 Baudelaire addressed the dedicated copies of his Gautier to artists that he admired including Flaubert, Manet and Leconte de Lisle, proof of the importance that he granted to this profession of aesthetic faith. Despite his so precious collaboration, Victor Hugo received a letter of thanks but no copy dedicated to “their” pamphlet. However, a recent study in black light made it possible to detect a scratched out presentation intended “in testimony of admiration”, then covered with a palimpsest dedication to Mr Gélis. This remorse is symbolic of the love-hate relationship that these two poets will maintain throughout their lives.
Therefore, it is through this copy offered to “his friend Paul Meurice” thatBaudelaire choses to thank the Hugo clan for this exceptional literary meeting.

Baudelaire and Hugo's Théophile Gautier is therefore, under his apparent modesty, a double manifesto of the two great poetry powers: L'Albatros by Baudelaire, against Ultima verba by Hugo. While “the wings of the giants [of the first] prevent him from walking,” the second “remains forbidden, wanting to remain standing.”
And if only two remain, it will be these two here!

An ex-dono handwritten note by Victor Hugo addressed to Paul Meurice has been attached to this copy by us and guarded. This note, which was no doubt never used, had however been prepared by Victor Hugo with several others, to offer this friend a copy of his works published in Paris during his exile. If history does not allow Hugo to address this work to Meurice, this presentation note, until now unused, could not, in our opinion, be more justly united.