Felice Beato: A final and moving tribute to the end of a world hitherto unknown to the majority of Westerners 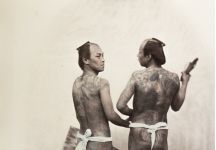 Felice Beato: A final and moving tribute to the end of a world hitherto unknown to the majority of Westerners
Edition-Originale takes you to the Land of the Rising Sun at the dawn of its opening to the Western world, exactly one hundred and sixty years ago, when the famous photographer Felice Beato arrived in Tokyo to immortalise the final splendors of traditional Japan.
***
Based in Yokohama, Beato was a pioneering photographer who quickly understood the European interest in the habits, customs, and culture of the Japanese. His albums, the very first to depict Japan, were both intended for the rare Western visitors wishing to bring back souvenirs to Europe or to be directly exported to the West. For decades, they were the only images known to Westerners: they could dream of an idealized Japan through these photographs. 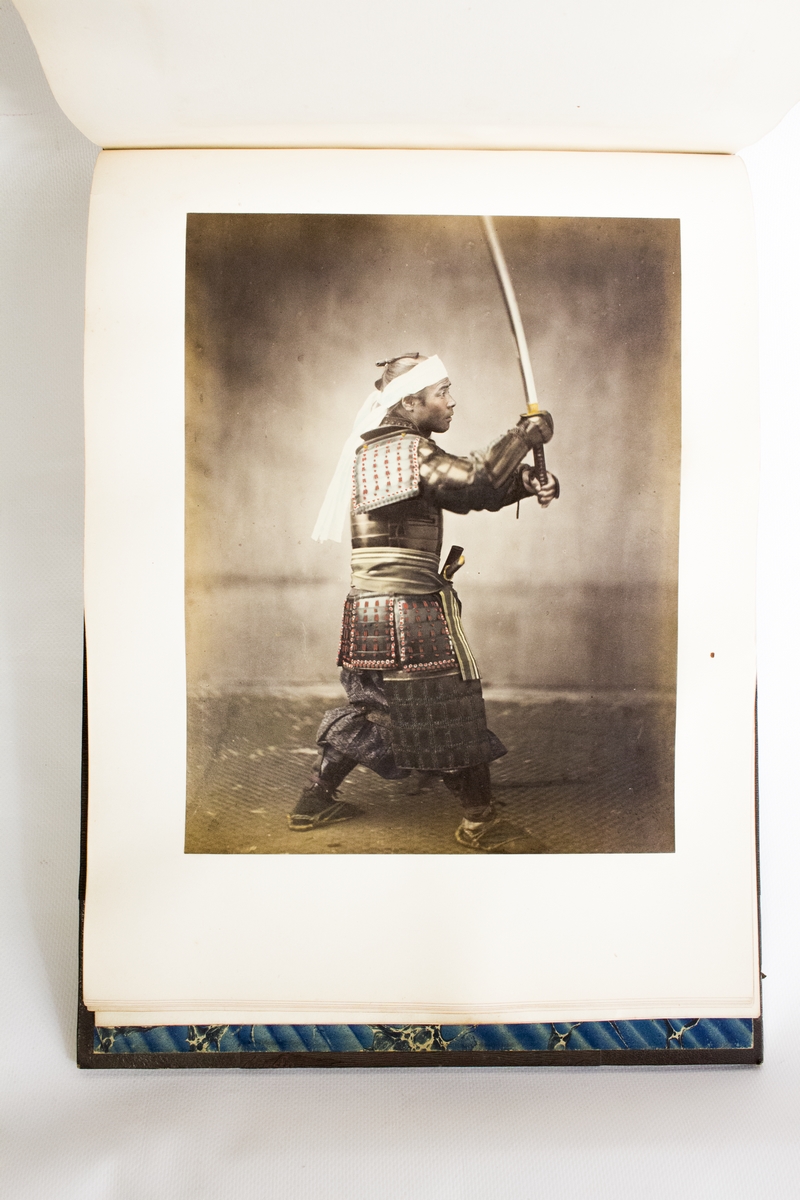 Superb album containing 99 large format original photographs (21,5 x 27,5 cm) printed on albumen paper, all superbly watercolored by hand. All of the photographs are full-length portraits that have been taken in the studio and outside. Almost all of the pictures have an English caption glued to the opposite left-hand page; these short texts are the work of James William Murray, Assistant Commissioner General in Yokohama.
Contemporary binding in half dark brown morocco, spine in five compartments decorated with blind tooling, triple compartments and blind tooled typographical motifs, triple blind tooling on the embossed paper boards with Japanese-inspired typographical motifs on wooden boards, marbled endpapers, all edges red. A small snag on the bottom margin of the upper cover, joints and corners slightly rubbed.

Exceptional photograph album, the very first published in Japan at the start of the Meiji period by one of the most significant photographers of the 19th century; ultimate and moving testimony to the end of a world that was, until then, largely unknown to the majority of Westerners.

Felice Beato (1833-1908) arrived in Japan in 1863, at the invitation of his friend Charles Wirgman (1832-1891), illustrator and journalist for the Illustrated London News, whom he met in China some years previously when, as a military reporter, he covered the Second Opium War. This Chinese period, during which he also put together photograph albums, influenced his work in Japan. Based in Yokohama, Beato was a pioneering photographer who quickly understood that the Europeans were interested in the habits, customs and culture of the people from the Land of the Rising Sun. His albums, the very first to represent Japan, were intended for both the rare Western visitors wanting to take souvenirs back to Europe, and also for direct exportation to the West. For decades they were the only images known to Westerners: through these images people could dream of an idealised Japan. Japan’s gradual opening to international trade led to the influx of many objects in Europe, amongst which were the rare photograph albums that fascinated Western artists, writers and art lovers such as Bing, Burty and Guimet: the Japonism revolution was under way. Some pictures from Felice Beato’s luxurious albums were meticulously enhanced by hand by painters, making unique works of art, bringing together European photographic techniques and the know-how of Japanese watercolor painters. The meticulousness with which these enhancements were carried out unquestionably summons up the print: several photographs were enriched with real miniatures (fans, flowers, fabrics...). The Japanese colorists worked directly in Beato’s studio and also served as photograph models, as one of the photographs in our album shows. 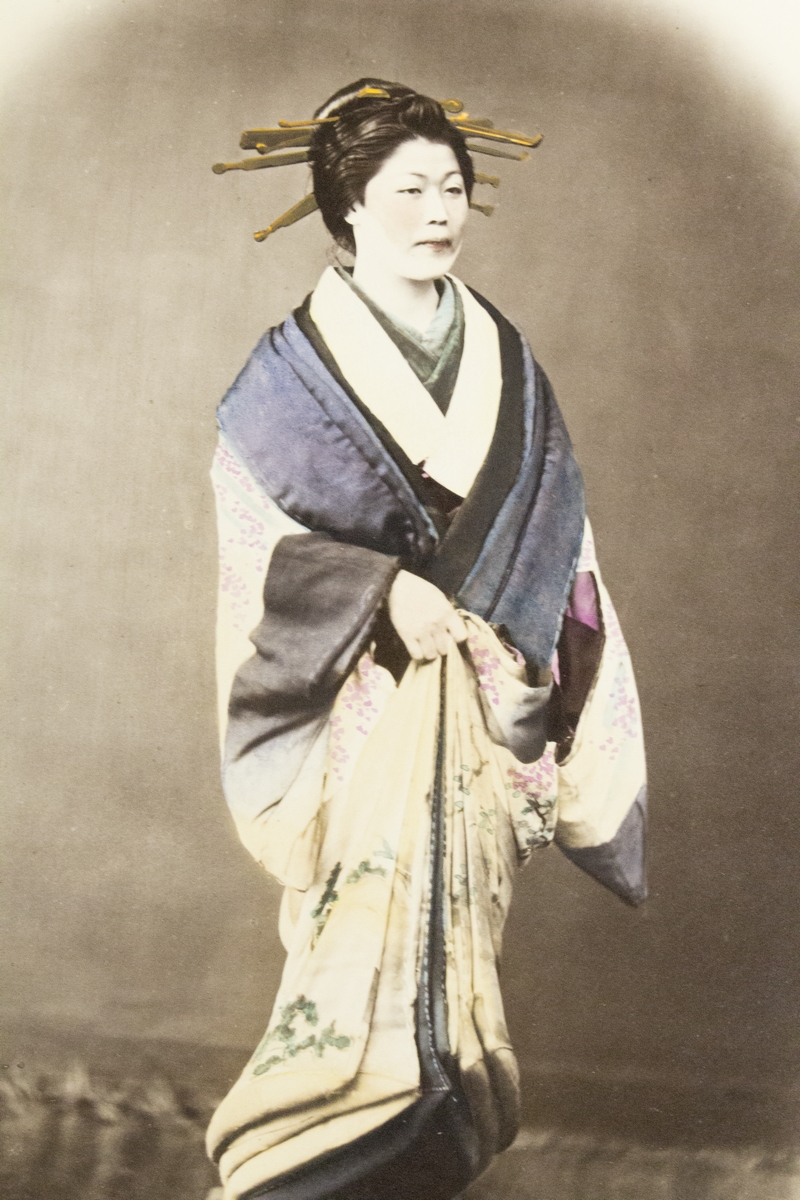 1868 is the year that marks the Meiji Restoration, synonymous with a voluntary transition towards industrialisation and the abandonment of a long feudal tradition. In wanting to assert itself as a world power, Japan follows the Western example of not suffering from their domination. The enthusiasm for photography becomes a strong symbol of this modernity. Felice Beato’s photographs are exceptional: they show the last moments of a Japan that is beginning its transformation towards modernisation. The album that we have to offer contains several rare photographs of the Samurai in armor or sometimes almost naked and covered in tattoos. One impressive and surprising picture, taken on the spot in 1864, shows officers from the Satsuma fief gathered around a map. Three Samurais appear in Western military dress, its members being the most virulent opponents of the Shogunate and actively participated in the overthrow of feudal power during the Meiji Restoration. The centre figure seems to challenge the objective of the scene and thus prefigure the Satsuma Rebellion (1877) that will bring its caste to an end. Authentic Samurai photographs will disappear over the coming years, to be replaced by actors in costumes. In addition to this image of the Samurai warrior class, Beato chooses to gather all of the social classes in this album: serious aristocrats and iconic courtesans rub shoulders with small traders, beggars and priests. All trades are also listed: barbers, hairdressers, mobile dentist, actors, porters, firefighters, grooms, masseurs, postmen, fishmonger, chef, artist, carpenter, street ven dors (sake), binmen, contractors, mobile traders, newspaper sellers. We highlight the photographer’s attention to detail; he wants to introduce the audience to everyday Japanese life and immortalize the native’s customs: fashion, gastronomy and culinary art, means of transport, military and family life, art and music. James William Murray explains all of these functions in his captions and sometimes draws parallels between Eastern and Western traditions.

An extremely rare and superb quality album entirely watercolored, of which, except in the Getty, we have not been able to find another such complete copy in European or American public collections. 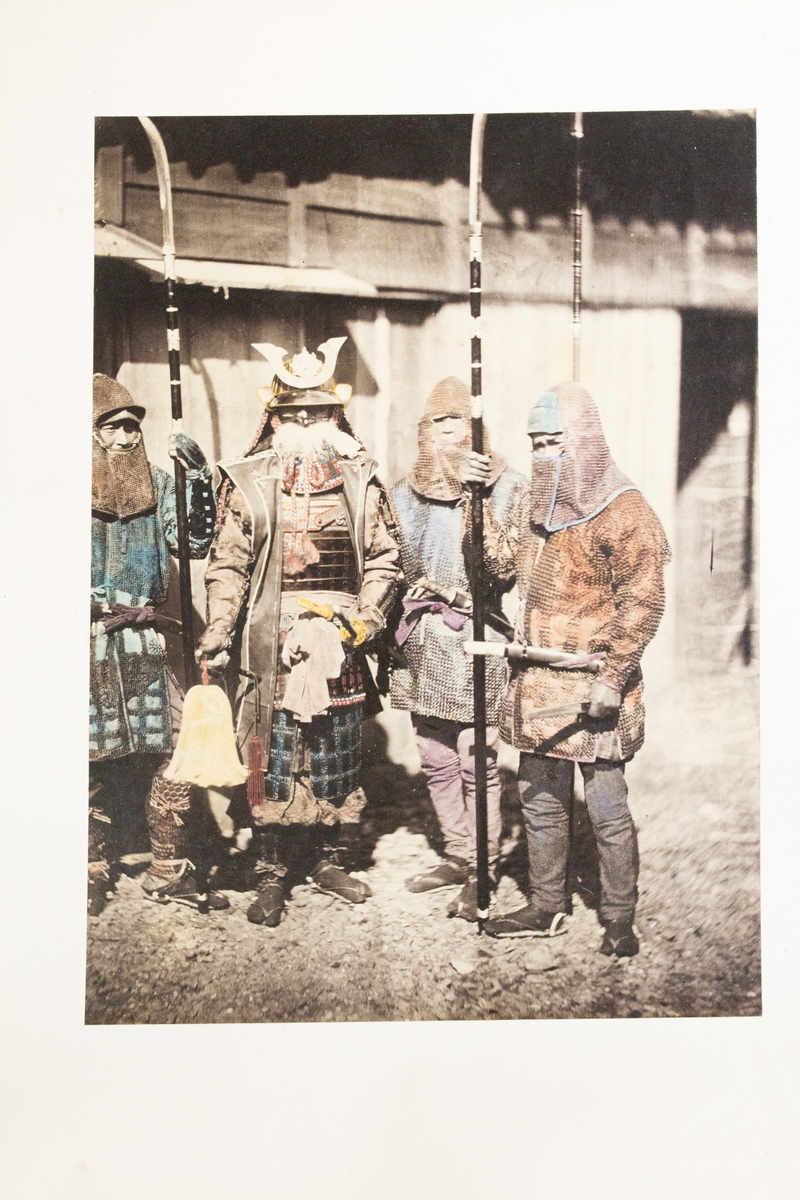