A historical record of a 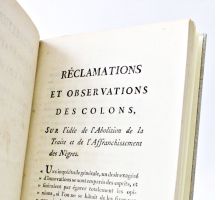 A historical record of a
Complaints and observations of the settlers, on the idea of the abolition of slavery and the emancipation of Negroes
David Duval Sanadon
or the relics of the defense of an anachronistic position

He leaves here a very rare relic pro-slave trade theses, the heart of a historical context marked by one of the noblest fights of the French Revolution: the struggle for the abolition of slavery. 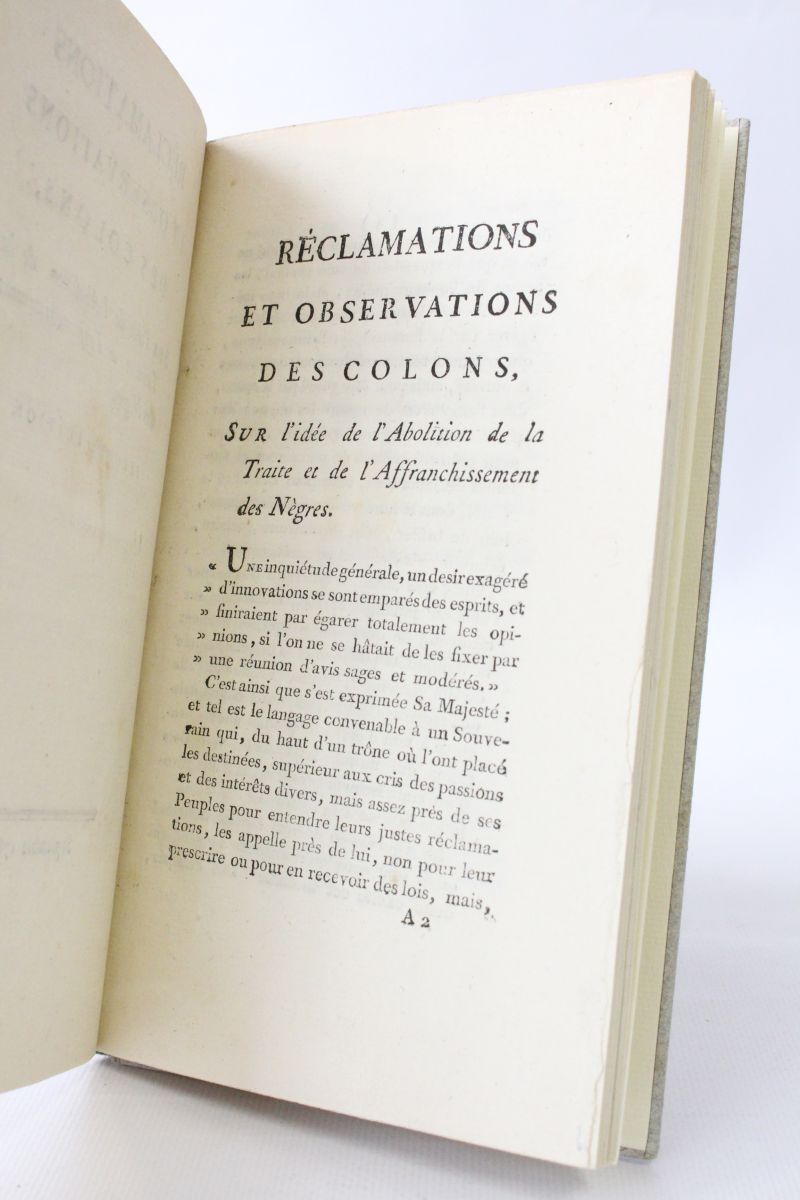 This short pamphlet opens, right in the context of the French Revolution, the clear observation of the significant mobilization of public opinion in favor of the abolition of slavery: "Yes, certainly, it is time to bring the misguided public opinion, inflamed on many questions that keep the peace and ensured the march of the Government. of this number is that of Negro slavery, which gave birth to so many written and produced a fermentation French Colonies threatens a future conflagration, and a fatal revolution in the metropolis itself. " Sanadon contrasts immediately Settlers and metropolitan French that "driven by a zeal [...] are not afraid of endangering properties, the existence of their fellow citizens, their brothers, and expose the Colonies to the most horrible disaster, "tabulating more pessimistic:" All the bonds of subordination are broken, all jobs are abandoned; the cruelest scenes are preparing; the dreadful signal is given in the name of freedom, while exclaims, everything weapon [...] these paintings are they exaggerated? have they thought about Y, passionate defenders of the cause of blacks? they ignore, or can they conceal the reality of the disastrous effects ? ". The author here a clear reference to the many anti-slavery societies were formed in the late 1780s, not only in France but also in the United States and England. Their important work of denunciation contributed to the development of multiple petitions demanding the abolition of slavery in the colonies. In France, in 1789, there are no fewer than fifty of grievances on the subject. 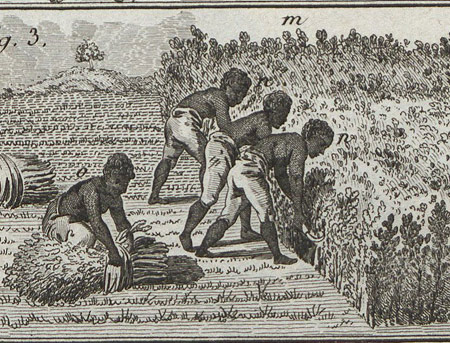 Humanist and universalist arguments of abolitionists, Sanadon opposes the traditional economic argument and attempts to show that the metropolitan trade is dependent colonies and abolishing slavery would be an "improbable idea" and serious consequences. In addition, the farmer believes it is the duty of France to keep the colonies, protect and develop because they are guaranteed a strategic position in the European market and in particular face the English competition, on which it should take advantage.

These theses will not be ignored by Mirabeau yet convinced abolitionist and founding member in 1788 of the Black Society of Friends, which militate for a gradual abolition of slavery. It is precisely the "situation" explosive "in Santo Domingo, model thinking Sanadon and emblem of the slave trade, which encourages Mirabeau to propose the establishment of a transition to a much more profitable employees and productive than slaves (Serge Bianchi, "floating Beer slavers, not a speech on the abolition of the slave trade" historic Annals of the French Revolution, 2001). 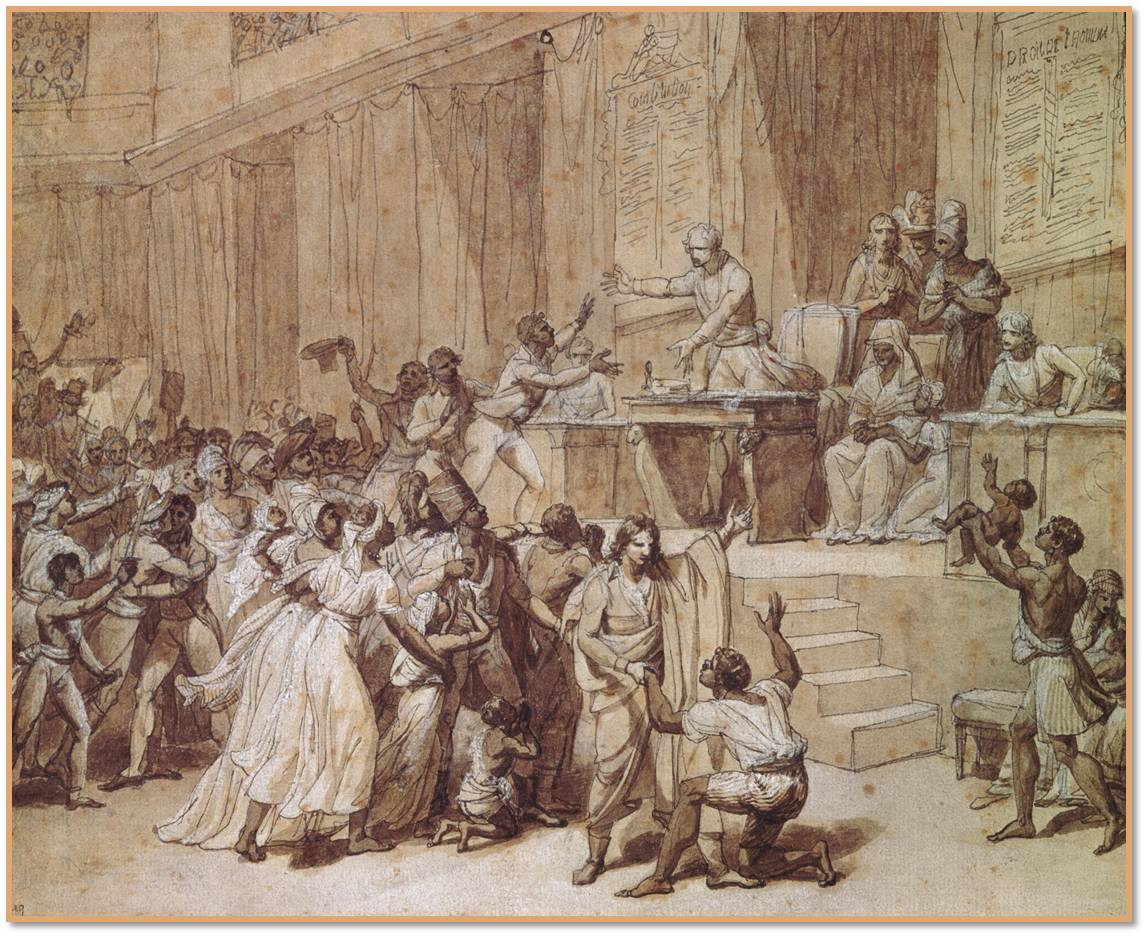 Despite its virulence, such as a text Sanadon is therefore not a blind defense of colonial privileges. Argued and based on practical experience, these libels are a real challenge for the humanist ideals of the revolutionaries, which will prove the viability of an ethical and egalitarian society.
Aware of the inevitable transformation of society and the value of humanistic arguments, Sanadon mixes his diatribe a plea on behalf of all settlers addressed to the States General in which he claims a colonized territories of regime change meant to prevent their total disappearance. Also advocates there to reject the addresses of the abolition project in favor of the creation of "a policy in the purchase and transportation of Negroes which satisfies both the desire of humanity and the same trade of France and the settlers. "
However, it is true to the royalist thinking of the old regime to the natural order of social organization that Sanadon ends his book by asserting a natural state of slavery: "The colonies can only be cultivated by Negroes slaves. [...] For the slave Negroes, because originally this was their fate in Africa; because such was their fate until today in the Colonies; because it would be impossible to contain them if they were to be freed ... ".

Astonishing iconic advocacy reactionary fear of the privileged against the advent of the Age of Human Rights.
Leave a comment