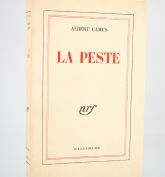 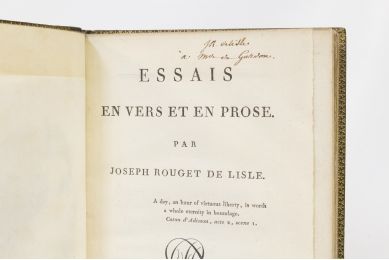 
One of the very rare copies enriched with an autograph - there are fewer than a dozen - of this first edition, featuring the Marseillaise.
First edition illustrated with an engraving inset engraved by Charles-Etienne Gaucher after Jean-Jacques Le Barbier and 4 pages of score engraved at the end of the volume. The Marseillaise appears in its real first edition, having been the subject of a pre-publication in the Almanac of the Muses in 1793 and in the form of loose leaflets.
Binding semi-sheepskin contemporary, smooth back adorned with boxes, jewels and gilded lace, title label red morocco, black cardboard boards. Several ex-libris handwritten or glued on the contreplat and the guards. Back restored, some foxinges. The last two letters of the dedicatee's name have been trimmed to binding.
The book is enriched on the fake page of an exceptional autograph from Rouget de L'Isle to another artist of the Revolution: "M de La Chabeaussie [re] / from the author".
Rouget de Lisle and Poisson de la Chabeaussière, the recipient of the consignment, both embodied the revolutionary fervor and marked Republican history by their pen.
The Marseillaise appears in the book on page [PAGE?] Among other poems and songs. This first edition delivers the famous song in its original state. It comprises six quatrains, as written by Captain Rouget de l'Isle for the Army of the Rhine in April 1792, then instituted national anthem in 1795 by the decree of 26 Messidor year III.
Paroliers and men of letters, Rouget de l'Isle and Chabeaussière were the zealous servants of the Revolution but also the victims of its excesses. At the writing of this dedication, in year V of the Republic, the two men are at the summit of their glory. One is the author of the national anthem that thrills revolutionary France, and the other the most popular republican catechism during the Revolution. Indeed, the Chabeaussière also composes a major work of the revolutionary inheritance: a republican, philosophical and moral Catechism , reissued 82 times until the Third Republic, and which promoted it to the Executive Commission of the public instruction . Like Rouget de L'Isle, he has enjoyed success as a lyricist and librettist, notably for the comic operas of Nicolas Delayrac. The history of La Marseillaise meets from its creation that of La Chabeaussière and the composer Delayrac, whose air offers a certain resemblance to the heroic drama of Delayrac entitled Sargines or the Student of love .
Neither La Chabeaussière nor Rouget de l'Isle, despite the celebrity of his Marseillaise, escaped the throes of Terror. Declared "suspects", they were incarcerated in 1793 respectively in the prison of Madelonettes and Saint-Germain-en-Laye. At the end of these dark hours, the two men lead a peaceful existence and continue to actively collaborate in the Almanac des Muses , which published La Marseillaise for the first time in volume.
At the death of the Chabeaussière in 1820, the copy knows a story of the most romantic. He always carries [OR?] The inscription of his second owner, Edouard Gendron: "This book was bought in 1821 - at a crossroads near the medical school square, among a pile of scrap metal".

First publication by his composer of the most famous symbol of the French Republic: La Marseillaise . His precious dedication brings together revolutionary poets with crossed destinies, whose writings left their immortal borrowed in the history of France.