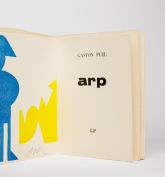 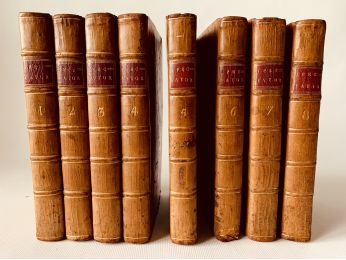 
New London edition. First illustrated edition of 8 frontispieces by Hayman and engraved by Grignon. Like the previous editions, a title vignette (portrait inset) repeated on the 8 volumes. The original was first published in volume in 1712. The newspaper began to appear again in 1714 at the rate of three publications per week for six months, but without Steele; these publications form the eighth volume.
English binding in full blond calf of the time. Back to nerves decorated with nets. Mute backs. Pieces of title of red morocco. Golden volume numbers. Shock at the tail cap of volume 6, split over 1cm horizontally. Upper bit of volume 2 and 5 split in tail. Traces of friction and a few scuffs on the backs, but a fine copy overall, very fresh inside.
The Spectator was one of the first English contemporaryicals which appeared daily from 1711 to 1712. Intended for the Middle Class, Addison believed that despite its circulation of 4,000 daily copies, it was read by around 60,000 Londoners. The Spectator was very popular and reissued many times during the 18th century. It took an ironic look at English society and made a lasting impression on the press with its novelty. Each issue revolved around 2000 words, and Addison and Steele shared the writing. The Spectator in its current version is today a newspaper well known to the English.