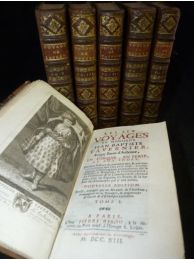 
New edition, the original having appeared in 1676; is illustrated 45 hors-texte plates, mostly folding (Vol. 1: 10, Volume 2: 14, Volume 3: 1, Volume 4: 9, Volume 5: 10 Volume 6: 1). A beautiful portrait of the author dressed in Persian Scotin frontispiece. The fifth volume contains a Collection of several relationships and treat singular and curiously, and the sixth New relationship within the seraglio of the grand seigneur, and a memory regarding the establishment of Jesuit fathers in the Indies in Spain. These supporting documents contain a description of Japan gathered from other traders and other books and a severe critic of English trade with the Indies. Full brown calf at the time. Back with five nerves adorned with jewels and gold boxes among which the bird irons, as well as parts of title morocco blond. All slices speckled red. Caps head and tail of the first missing volume and that of the sixth with a small gap. Small jobs to the back. Five blunted. Corners Tearing clumsily restored sheet B2 of the third volume. Traveler in Europe at a young age, it is as rich merchant in diamonds and precious objects that Tavernier did most of his travels in the East, by the way of Persia, to India. Back in France, the king had asked him the account of his travels, since it is also the name of King Tavernier made these trips. If Tavernier is not a scientific observer (he did not have the skills), knowledge of trade routes and business principles could not be more accurate and valuable, especially as the author provides sufficient background information on each country. The book was a great source of inspiration for the Persian Letters of Montesquieu. Voltaire spoke, meanwhile, with disdain of these trips, saying "it does not tell much to know the major roads and diamonds." Note enthusiastically relations Tavernier up a strong and eloquent testimony early trade with the East Indies and Persia.