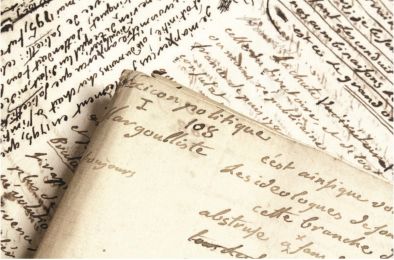 The complete manuscript unpublished papers of Louis, Chevalier de Sade (1753-1832), author of the Lexicon politique and cousin of the famous Marquis.
The important geopolitical, historical, and scientific archives of a learned aristocrat, a privileged witness of the end of the Ancien Régime, the French Revolution, the Consulate, Empire, and Restoration.
A unique fund of research on the implementation of a constitutional monarchy.

Exceptional collection of the Chevalier Louis de Sade's personal archives, the cousin of the Marquis de Sade, representing 12,000 handwritten pages, including several thousand unpublished and written by his hand. The Chevalier shows a thought system that he describes as «holistic,» including historical, political and scientific reflections.
Louis, Chevalier de SADE