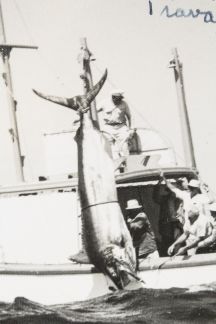 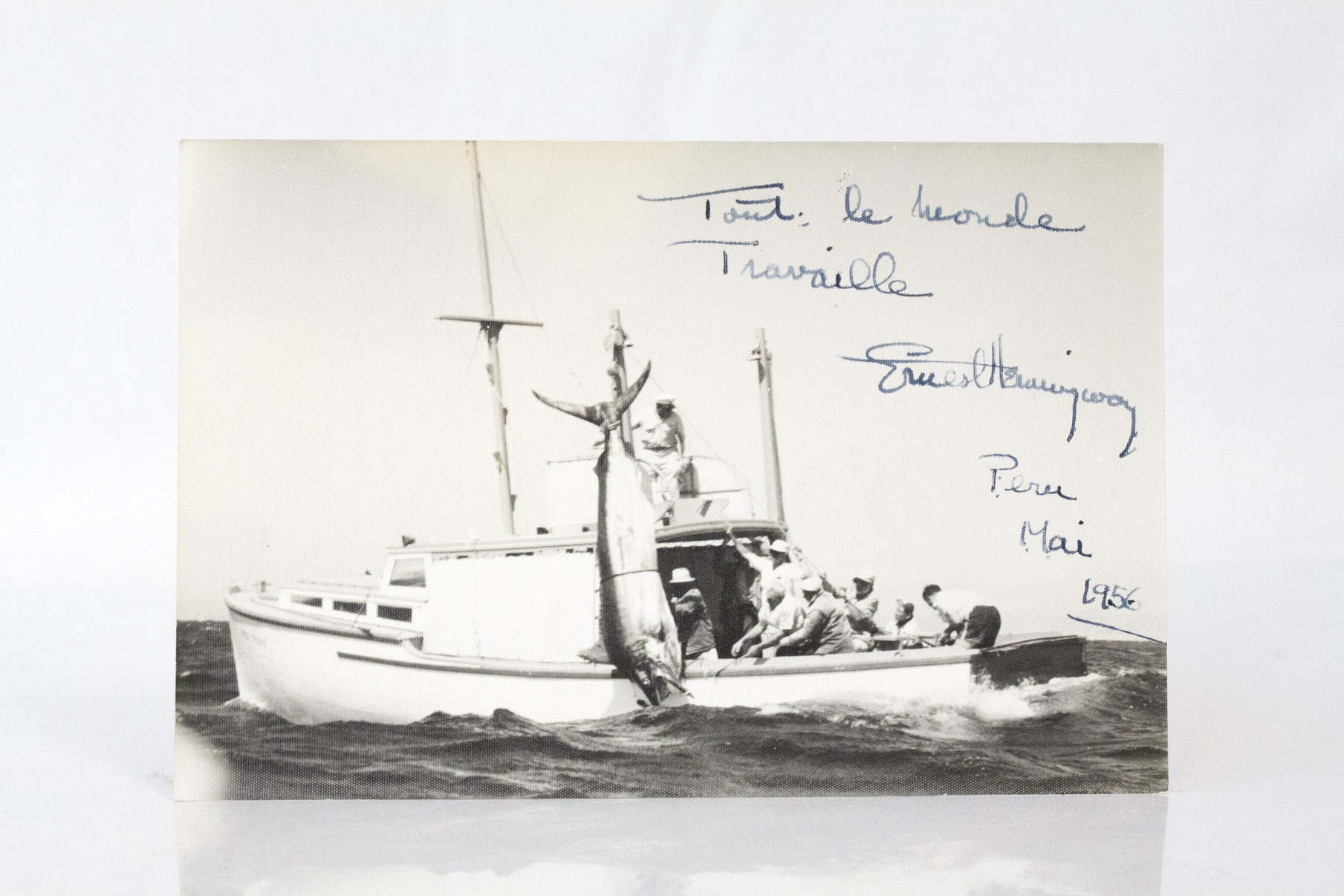 This fishing scene offered to a modest bartender synthesizes, in its apparent simplicity, all the passions and the spirit of the most famous American writer of his time.
The photograph was taken during the shooting of the adaptation of Old Man and the Sea. Hemingway was then a technical adviser, both as a fisherman and a writer.

John Sturges, the director, despairing of having no giant marlin to film in Cuba went to Peru, accompanied by Hemingway, in search of the fabulous animal: "They were talking about flying to Cabo Blanco, Peru, where they said, the marlins weighed on average 500 kilos and adopted this behavior of great lord that had that of Ernest's novel. (Carlos Baker, Hemingway story of a life 2 / 1936-1961 ). Leaving aside the writing of his African newspaper, Hemingway dreamed of living the adventure of his hero, and to ferret like him a giant marlin. Like Santiago, he also spent several weeks empty-handed to finally "bring back the boat a fish over three hundred pounds before letting go of the line for the marlin performs a dozen pretty jumps for the benefit of the operators of shooting . Ironically, the production will eventually choose to use a rubber marlin that Hemingway will call a "giant condom". 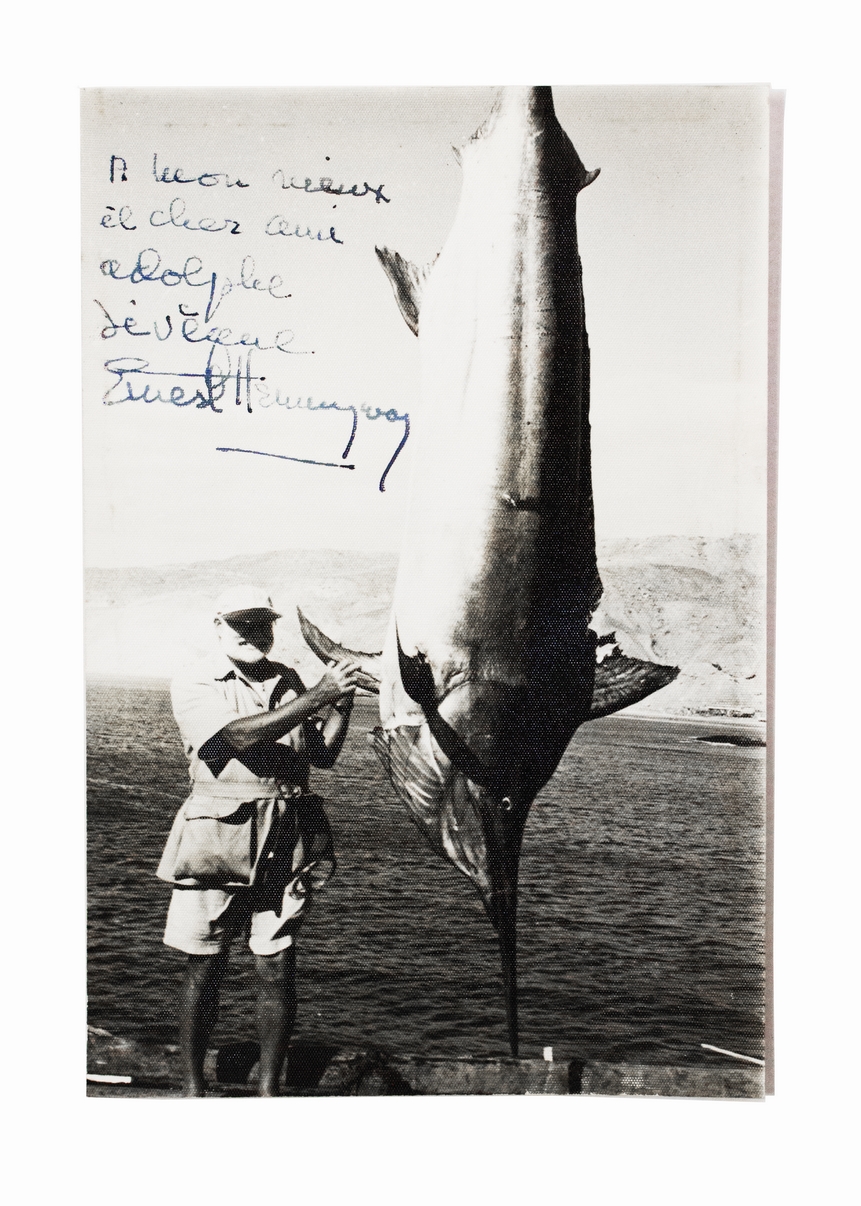 If this Peruvian month was partially omitted by the biographers, several photographs became mythical immortalized this miraculous fishing in which the 'old' writer with the imposing sailor's beard seems to be confused with his work. Some of these snapshots reproduced on postcards are today mixed with Cuban photographs and the Miss Texas, the boat of the production, is often confused with the famous Pilar, acquired by Hemingway in 1934 and today exposed in Havana.
Very rare, the original prints of this adventure seem to have been reserved to the members of the expedition and Hemingway may have received some copies, although we did not know other original photographs dedicated to this shoot.
Hemingway addressed this one - as well as another in portrait, originally contrived on a reissue of The Old Man and the Sea - to the Frenchman Adolphe Lévèque, bartender on the liner Ile-de-France.
This employee of the Transatlantic General Company is unknown to the writer's biographers, yet this testimony of friendship, sent from Cabo Blanco, reveals a real complicity between the great American writer recently nobelized and the modest French barman of three years his junior. This "old and dear friend," as Hemingway calls him, made his whole career on the Ile-de-France. He was thus a privileged interlocutor of the great whiskey enthusiast during the seven crossings he made, from 1930, aboard this giant of the seas for which the young writer immediately took affection.
Completed in 1926, the Ile-de-France is indeed the first modern liner, ambassador of the Art Deco style, luxury and "savoir-vivre" Paris between the two wars. He made his first voyages between Le Havre and New York, while the author of Paris is a party left France and the Latin Quarter, where was born his vocation as a writer.

On the Ile-de-France, Hemingway found the Paris of his youth and continued to enjoy all the pleasures of the roaring twenties. Until the end of his life, he will praise his favorite ship and life on board: "The same old big fat, wide, strong boat with wonderfull boards so good). And wonderful wine list ... " Very weakened during his last crossing in 1957 he will be so well treated on board that he will decide to stay during the cruise in the West Indies!
It was on this ship that he seduced Marlene Dietrich, alongside Humphrey Bogart (who tried in vain to buy him the rights of the Old Man and the sea ) and the many artists and stars who, like him, regularly crossed the Atlantic at edge of the luxurious building: Rita Hayworth, Raoul Dufy, Judy Garland, Cary Grant ...

But the link that binds Hemingway with this ship and his crew is stronger than this taste for the "french touch" shared by many of his contemporaries. 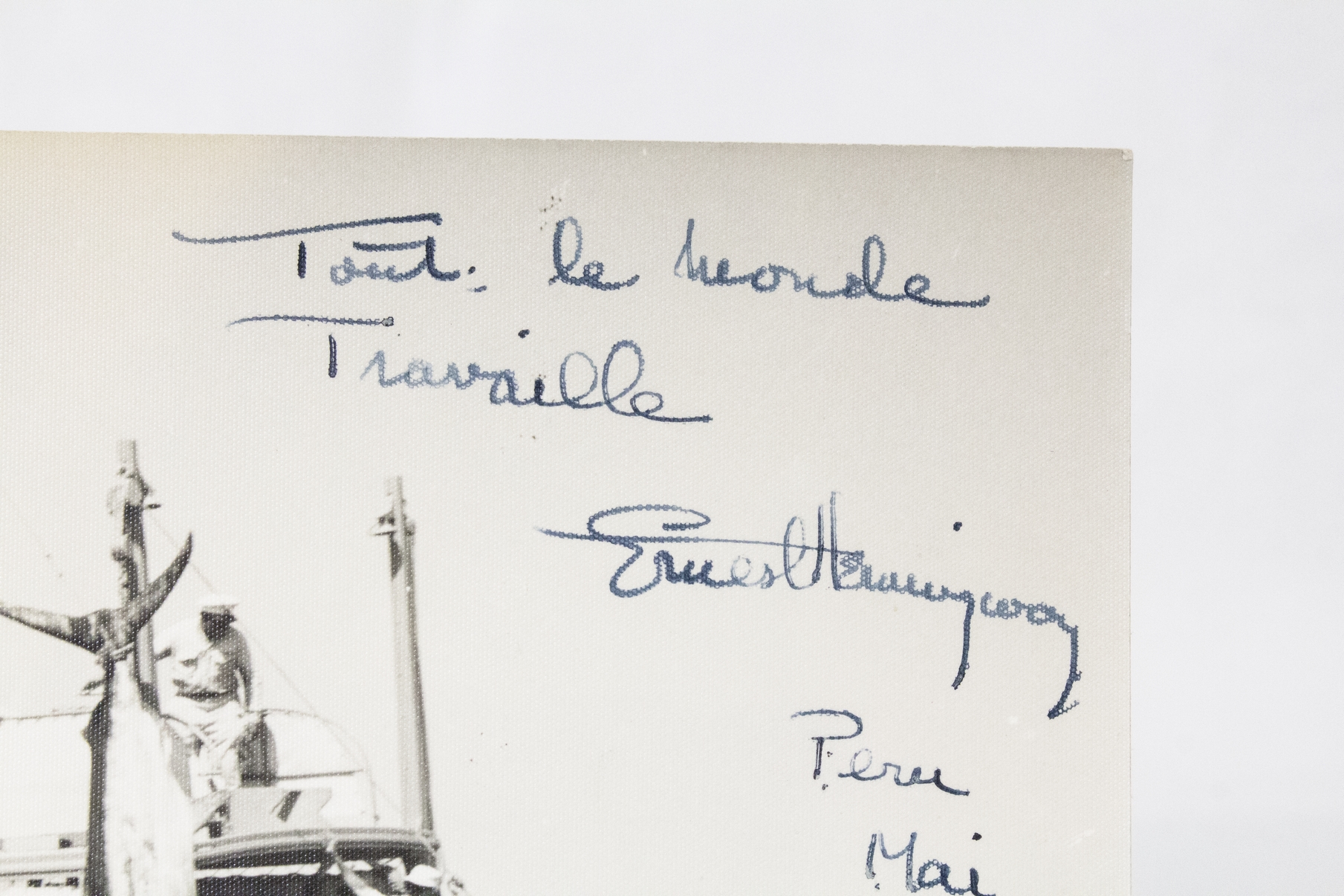 Over the past thirty years on the ocean, the fate of this amazing ship - with its famous floatplane propelled from the bridge to save a day for the mail - and that of the intrepid writer seem to be constantly echoed.

Like its illustrious passenger, the Ile-de-France had an exemplary career. In 1937, they were both committed to the cause of the Spanish Republicans, a war reporter, the second transport of Canadian, Cuban and North American volunteers. Then in 1940, while the Ile-de-France refusing the armistice joined New York, before being armed and to rally the Free French Forces, Hemingway also armed the Pilar to patrol the Caribbean Sea in search of possible U-boat. After the war, the good and loyal military services earned the building the highest distinctions: the Croix de Guerre and the rank of Chevalier du Mérite Maritime. A few years later, the writer was successively awarded the most prestigious honorary titles: the Pulitzer Prize and the Nobel Prize. The "Saint Bernard of the Seas" so nicknamed for its numerous and spectacular rescues, knew several triumphal receptions in the port of New-York worthy of those reserved to his alter ego with the equally protective nickname: "Papa".

Among the sailors who knew these glorious hours, some, such as our bartender, had contributed from the beginning to write the story of this legendary ship.
Adolphe Marie Léveque, from a small fishing village near Saint-Nazaire, was hired at the age of 25 on Ile-de-France. He participated in all his trials, including the Resistance, particularly dangerous for large ships, target of choice of submarines.
From the first years, Adolphe Lévèque had a privileged role aboard the French ship that the Americans affectionately nicknamed "The longest gangplank". Indeed, during the prohibition, the alcohol flowed on the liner, because even at quay, the Ile-de-France remained a French territory, country of "good living". Thus, during stops, the bar Adolphe Lévèque was transformed into a place of pleasure among the most popular of New York.
Even more than for his countrymen, alcohol and bars were of particular importance to Hemingway, whose myth, carefully maintained by the writer, is largely associated with his ethical pleasures. At the Liberation he flattered himself especially for having liberated the bar of the Ritz. For the inventor of Bloody Mary and Daiquiri Sour, alcohol is also an essential novelistic component: "When you have something difficult to tell a character, especially to drink. "

In Drifting Islands, a posthumous work whose writing is contemporary with this dedication, Hemingway pays a heartfelt tribute to his favorite ship: "During the crossing to the east on the Ile-de-France , Thomas Hudson learned that hell does not necessarily look like what Dante or one of the great painters of hell described, but that it could be a comfortable, enjoyable and much appreciated boat, taking you to a country where you you are always approached with impatience. "

The preponderant role of alcohol in the novel is accentuated aboard the ship: "he understood that the whiskey was good for him [...] Listen speak whiskey, he told himself. What a solvent for our problems. ". Moreover, the figure of the bartender is eminently positive, since it is a bartender, Bobby, who will divert the hero from his suicidal urge after a misadventure with ... a swordfish: "We all ended up calling it Suicide. So I said to him: Suicide, you'd better stop yourself a bit or you'll never live long enough to reach nothingness. "
In his life, as in his novels, alcohol, and its incarnation the bartender, are not, for Hemingway, vectors of self-destruction but, on the contrary, discreet adjuvants that carry the character and prolong the author's thought.

Doubtless Adolphe Lévèque, this friend in the shadows, he also represented this companion of solitude essential to the writer: "On board the Ile-de-France already, Irving Stone had noticed that Ernest drank a lot. - What do you want me to do ? said Mary to Mrs. Stone. He did not marry a policeman. It is better that I leave him alone. (Op.cit.)

At the bar of an Art Deco lounge sailing in the heart of the Atlantic, at the time when the other passengers sleep, Ernest Hemingway and his friend Adolphe Lévêque are pictured together, sharing a solitary accomplice. Beyond the social classes and notoriety, the two fifties, happy to meet, invent new cocktails, relive the crazy years of their youth and especially boast of their exploits when they indulge in their common passion: the peach. 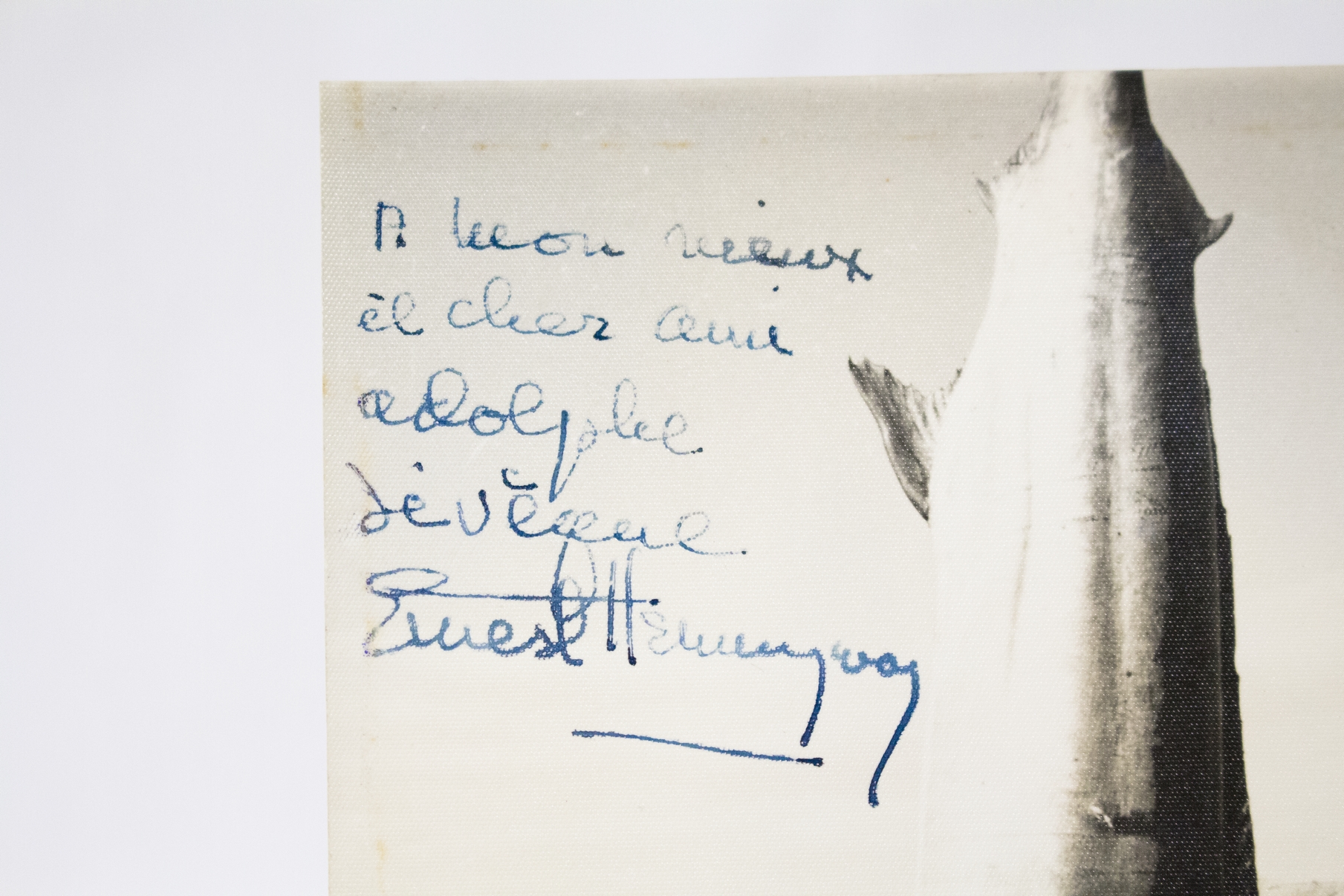 See our complete description and all the pictures :