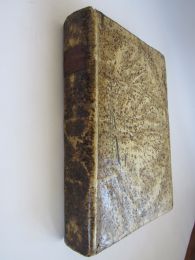 SOLÓRZANO PEREIRA Juan de
De iusta indiarum occidentalium inquisitione, acquisitione & retentione
Ex typographia Francisco Martinez, Matriti (Madrid) 1629, small in-folio (20 x 29,5 cm), (6) 751 pp. (100), contemporary vellum
First edition, very rare. A very attractive frontispiece-title by Roberto Cordier showing an altar with allegories of Faith and Religion, the king of Spain with one foot on an Globe supported by Neptune. A second volume was published in 1639 on the government of the West Indies.
Contemporary speckled limp vellum. Jansenist spine. Red morocco title-piece. Spine faded with black spots. Small lacks to head and foot of joints. Trace of a yellow dampstain to right-hand corner of last twenty leaves. Letter to Phillip IV of Spain and introductory portions lacking, a total of 11 leaves.
In 1618, Juan de Solórzano Pereira wrote the king a petition to make him part of a book project on the West Indies. King Philip IV was seduced by the general idea of legally asserting once and for all the legitimacy of the Spanish possessions in America and financed the first book on justice, but not the second on the forms of government, which appeared in 1639. The author had been a judge in Lima since 1609 by Royal appointment. The Viceroy of Peru appointed him Governor of Huancavelica, a mining outpost of key economic importance to Spain, an office he was to fill during his eighteen years in Peru, as well as Procurator to the Supreme Council of the Indies (Real y supremo consejo de Indias). Pereira developed an extensive and detailed knowledge of Spanish jurisprudence in the West Indies, studied numerous documents, and ended up with a significant wealth of knowledge, especially on the ancient customs of the indigenous peoples.
The first part of the book is dedicated to studying the laws that allowed the attachment of the American possessions to the crown of Castille. Here, the focus is the definitive legitimation of the Spanish possessions in America. The author then looks at the question of the Church and its relations with the Spanish crown, as well as laws on government in general, the administration of justice, and finally the laws regulating relations with the indigenous peoples and territories. The importance of Pereira's work is to be found in his relentless effort to find the history and origin of each law.
1680 saw the publication of the famous collection of the laws of the Indies, (the Recopilacion de las leyes des las Indias), but this could not replace the excellent work of Pereira, who spent a long time studying the oldest laws as well as those of the Indies. In fact, all the ancient laws, and their indigenous origins, disappeared from the collection of the laws of the Indies, and Pereira's work would remain key for the history of the West Indies and Spanish Americas.