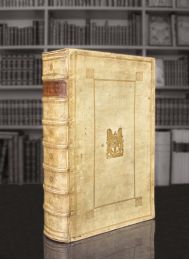 
New edition whose achievement is due to Friedrich Sylburg; the first edition of Sylburg seems to have appeared in 1586 in Frankfurt. Two title pages shown in red and black with a large thumbnail title, brand Weidmann printer. Bilingual edition in double column with the Latin look. This edition also contains the chronology of Glarean.
Copy of arms of the city of Venice struck on the dishes.
Bound in full vellum gilded. Back with nerves decorated with jewels and nets. As an exhibit in red morocco. Double frame net with angular irons, mentoring and second with double net. Vellum dirty, crumpled title page bearing a thin tear without missing foxing and browning scattered, sometimes quite marked. Despite vellum wearing uniforms dirt wove splendid golden weapons of Venice.
Hellenistic deemed the sixteenth century, Sylburg was director of Latin and Greek editions of the printing of Wechel in Frankfurt; publishing works of Halicarnassus in Greek and Latin, with many comments, is one of his best achievements. If Antiquities of Rome's most famous work of Halicarnassus (where the author attempts to connect the first Rome to Greece), bears the Latin translation next to Sylburg, it is not just the rhetoric, only in Greek.