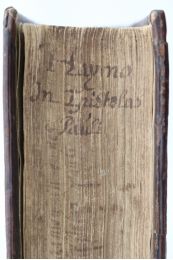 
Rare edition, unknown to the BNF and many libraries. Binding Renaissance in full glossy brown calf with back to 4 nerves, formed a separate boards in the center and decorated with scrolls central rectangle, rich frieze framing rectangle composed of musical angels, a flutist, a player drum and decorative elements. Slots for the location of laces (now extinct). Top cap restored, and various minor restorations (edges, corners and cover pages ...). A Vol. very small in 8 unpaged not folioté. Haymo was a Benedictine priest of the ninth century (he died in 853), after traveling, including Tours, and held various positions, including teaching in the monastery of Fulda, he was appointed abbot of the monastery of Haberstadt. He was a prolific writer and most of his works are comments from the scriptures and the book we present concerning the Epistles of St. Paul. In line with the exegetical tradition of his time, Haymo was not an original commentator, and his ideas are taken from the church fathers, but his position tends to accentuate the deep moral and mystical texts he comments, and his works have interest to reflect the age in which he lived. --- Please note that the translation in english is done automatically, we apologize if the formulas are inaccurate. Contact us for any information!