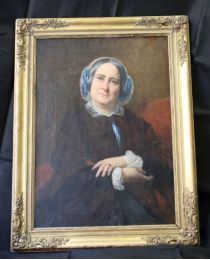 
Directed by Charles Landelle one of the most famous academic artists and most popular of the Second Empire, this beautiful portrait of a woman sitting in a chair, includes all the codes of the genre and shows the strong influence of Ingres, the great master of portraiture in his time, which was not yet his teacher. Details of hands especially direct reference to the style of the painter of the Odalisque and Turkish bath. The work is signed and dated 1849 lower right also recalls another famous painting: Portrait of Veuve Cliquot painted by Leon Cogniet two years later. That year the painter shows two portraits of women at the show and we think because of the anonymity often public models (simply titled the initial of their name) and the large size of this painting that could be one of them.

Born in 1821 in Laval, Charles Landelle moved to Paris at the age of four years, then joined the Royal School of Fine Arts in 1837 as a student of Paul Delaroche and Ary Scheffer. Early in his career, Landelle painted several portraits to support himself. Strongly influenced by Italian painting after trips to the South of France and Italy, it copies some paintings of the great masters of the Renaissance to the Louvre. Medals at the Salon from his earliest exhibitions Fra Angelo receiving the inspirations of God (1842) and St. Cecilia (1848), he distinguished himself by religious and historical subjects that allow him to win the recognition of the high society of his time. His critics assure him success at the Salon soon numerous state commissions, including The Rest of the Virgin in 1854 which earned him to be awarded the Cross of Knight of the Legion of Honor. That same year he produced pastel portrait of Alfred de Musset, now in the Louvre. The artist thus embraces a career official painter between state controls and portraits of members of high society. Able to adapt to the tastes and fashions of his time, quickly gaining a reputation Landelle he knows how to maintain, never forgetting to provide a portrait or a painting to its benefactors. In the second part of his career, after the official portion of it is was somewhat out of breath, the artist traveled extensively in Morocco, Egypt, Algeria and is dedicated to Orientalism that will occupy much of its production until his death in 1908.

Today a number of his works are preserved in the museum. An important background was bequeathed to his hometown of Laval but there are also some of his works in the Louvre, the Ingres Museum in Montauban, the Museum of Fine Arts in Grenoble, Pau, Rouen or the castle Versailles.

Note: We do not provide transportation to the work.

--- Please note that the translation in english is done automatically, we apologize if the formulas are inaccurate. Contact us for any information!