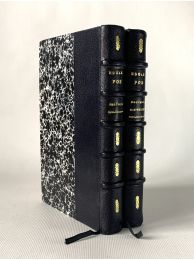 
first editions of these two volumes of Edgar Poe's tales rarely presented in a uniform binding.
Bindings in half shagreen red black modern. Back to nerves decorated with 4 small irons of the romantic type. The bookbinder used contemporary papipers for boards and guards. Immaculate paper, in new condition. A shortfall in the volume of the New Stories, p. 240, with loss of the last letter on 5 line.
Poe's Extraordinary Stories translated by Baudelaire, with his preface, His life, his work, are the first link in Baudelaire's conquest of his double literary prose, intended to establish the name of Charles Baudelaire alongside Poe.
The New Extraordinary Stories are published a few months before Baudelaire's first collection of poems: Les Fleurs du mal . If we know what EA Poe owes to Baudelaire, whose superb translation goes beyond the original work, we often omit the literary debt of French to his American model. Because, more than an exercise in translation, Baudelaire found in reading extraordinary stories , the very soul of his poems still just sketched out.
After the success of his first translation of the Extraordinary Stories in 1856, Baudelaire adds to his New Extraordinary Stories , a unique preface which, far beyond a simple presentation of the "dark and strange genius" of Edgar Allan Poe, is revealed a true profession of artistic faith of this humble translator who is preparing to become one of the greatest poets of world literature.
“ In the midst of a greedy world, hungry for materiality, Poe darted into dreams. Muffled that he was by the American atmosphere, he wrote at the head of Eureka: "I offer this book to those who put their faith in dreams as in only realities! ”[…]
An aristocrat by nature even more than by birth, the Virginian, the man of the South, the Byron lost in a bad world, has always kept his philosophical impassiveness, and, either that he defines the nose of the populace, or that he taunts the fabricators of religions, that is to say he flouts the libraries, there remains what was and what will always be the true poet, - a truth dressed in a bizarre manner, an apparent paradox, which does not want to be rubbed with crowd, which runs to the far east when the fireworks fire at sunset. "
Henry de la Madelène, writer and friend of Baudelaire is not mistaken, when he enjoins his contemporaries to discover the poet through his translations of Poe: "Read them carefully, and you will at the same time secret of Baudelaire's soul and the secret of his works "